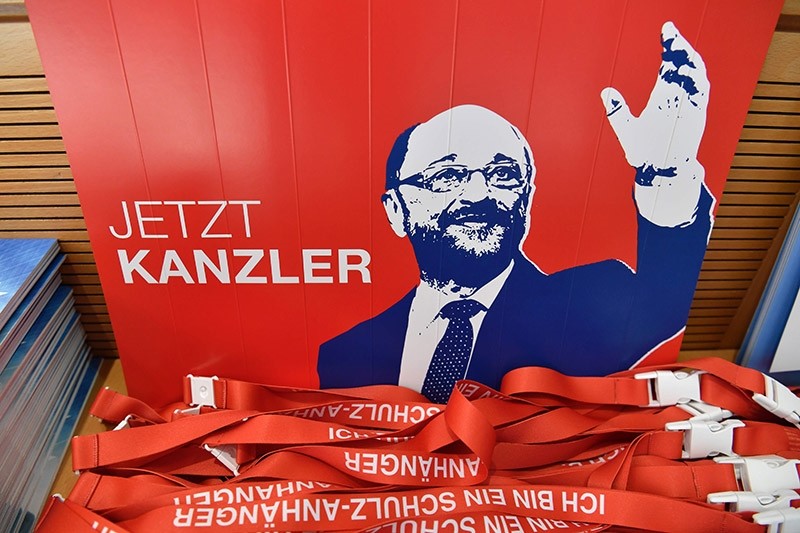 A placard featuring SPD chairman and candidate for chancellery Martin Schulz reading ,now chancellor, and campaigning material is displayed on August 1, 2017 at the Social Democrats Party headquarters in Berlin. (AFP Photo)
by Compiled from Wire Services Aug 03, 2017 12:00 am

Chancellor Angela Merkel's challenger in Germany's Sept. 24 election is suggesting that he would be better at standing up to U.S. President Donald Trump than the longtime German leader.

Speaking to German news magazine Der Spiegel on Thursday, Schulz - whose Social Democratic Party (SPD) is lagging about 15 percentage points behind Merkel's Christian Democrats (CDU) - said that "at the end of the day, what men like Trump need are clear statements."

"I believe I am better than Mrs Merkel at that," Schulz said.

Schulz was also quoted telling Der Spiegel that Trump, who's unpopular in Germany, "is a risk for his country and the whole world."

The SPD candidate also criticized Trump's "merciless nepotism ... by placing himself and his family above the law."

Merkel has taken a diplomatic approach but also distanced herself from Trump by suggesting Europe can no longer entirely rely on the U.S.

The SPD gained about 10 percentage points in the polls earlier this year when Schulz took over from the unpopular Sigmar Gabriel, but the euphoria surrounding a potential resurgence quickly fizzled out.

Merkel is running for a fourth term in office in the September 24 poll, which is also likely to grant the right-wing Alternative for Germany (AfD) seats in the Bundestag parliament for the first time.