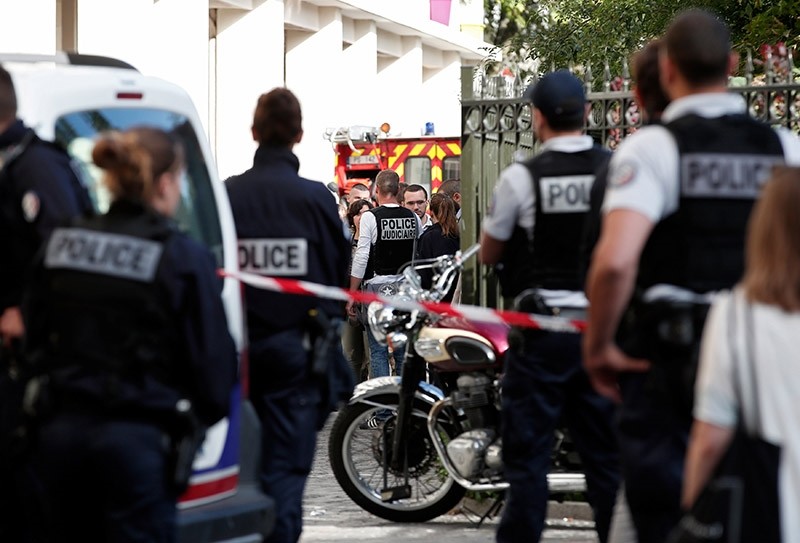 Police secure the scene where French soliders were hit and injured by a vehicle in the western Paris suburb of Levallois-Perret, France, August 9, 2017. (Reuters Photo)
by Daily Sabah with Wires Aug 09, 2017 12:00 am

Six French soldiers have reportedly been injured after a vehicle rammed into them in the Paris suburb of Levallois-Perret.

The Paris Police Authority announced Wednesday that police units have launched an operation in the area to find the car that attacked the soldiers on route.

The police also said two of the soldiers were seriously injured, while the other four sustained light injuries.

French media reported that the six injured soldiers were taking part in Operation Sentinelle, which involves widespread army foot patrols as a deterrent measure after a series of terrorist attacks since early 2015.

The vehicle appeared to clearly target the soldiers but the motive remains unclear, a spokesperson for the Paris police said.

Patrick Balkany, the local mayor for the western suburb of Levallois-Perret, had also "no doubt" that Wednesday's incident in which a car drove into a group of soldiers, was a deliberate act.

"Without any doubt, it was a deliberate act," Balkany told BFM TV.

"It's an odious act of aggression," Balkany also said, adding that the car in question was a BMW.

French officials said later Wednesday that police have arrested a man on a highway north of Paris in the search for a driver who rammed his car into soldiers.

Two officials said it is too early to say for certain that the man was the driver.

One of the officials said the arrest was violent, and police opened fire on the suspect. The other official said the arrest took place on the A16 highway when the man was stopped as police hunted for cars suspected of involvement in the attack.

The officials weren't authorized to be publicly named.

France has been under a state of emergency since November 2015 and has seen a string of attacks on security forces who have been regularly targeted, particularly those guarding key tourist sites.

In April, a policeman was shot dead on the Champs-Elysees by a man with a long criminal record, who investigators determined was acting from terrorist motives.

Failed attacks by individuals have also taken place on police and soldiers on the Champs-Elysees, near the Louvre museum and outside Notre Dame cathedral.

A man wielding a knife was arrested on Saturday after trying to force his way through a security checkpoint at the Eiffel Tower.

Anti-terrorism prosecutors are also looking into that incident, although the suspect has been sent to a psychiatric hospital where he was previously being treated.