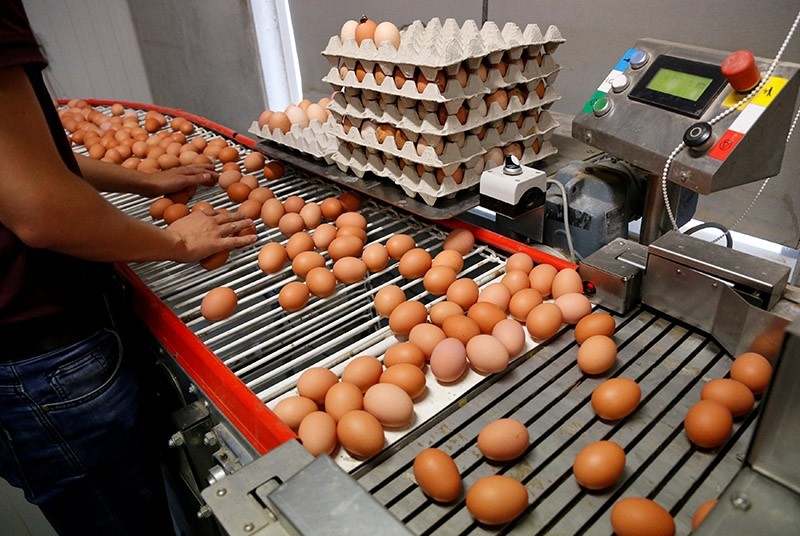 A worker inspects freshly laid eggs on a production line at a poultry farm in Wortel near Antwerp, Belgium August 8, 2017. (Reuters Photo)
by Compiled from Wire Services Aug 09, 2017 12:00 am

Belgian investigators have found eggs with dangerous levels of the insecticide fipronil, the country's national food safety authority (FASNK) said on Tuesday, while the country blamed the Dutch for failing to alert rest of Europe on time.

The analysis in Belgium, the first country to report a possible mass contamination, found 0.92 milligrams per kilograms (mg/kg) of the substance, which exceeds the EU-mandated health safety level of 0.72 mg/kg.

On Monday, FASNK said that the highest level of fipronil measured in Belgium had been 0,096 mg/kg.

The food safety body was deciding on what measures to take in light of the new figures.

Dutch authorities knew as far back as November that some eggs in the country were contaminated with an insecticide and they failed to notify their European partners at the time, Belgium's agriculture minister said Wednesday.

Belgium signaled on July 20 that it had found contamination in the eggs. But Belgian Agriculture Minister Denis Ducarme said that Belgium's food safety agency has documents "that indicated the presence of Fipronil in Dutch eggs as early as the end of November 2016."

Ducarme told Belgian lawmakers that "there was concerning this no official communication from the Netherlands."

He said he wrote to his Dutch counterpart for an explanation, and also spoke to the European Commission's agriculture commissioner, "who seemed to already have this information."

"If we had seen this information communicated to our respective agencies, vigilance concerning Fipronil would have been greatly increased," Ducarme said, suggesting that the tainted eggs scandal might have been avoided.

The Dutch food safety authority had no immediate reaction to the Belgian minister's comments. A European Commission spokesman said the Commission would "follow up" on the allegations.

Carsten Reymann, the spokesman for Germany's Agriculture Ministry, said he could not comment on the claim that the Dutch new of the contamination in November. "What's needed here is total clarity," he said. "We have to know when this substance was used and where. And what happened to the eggs that were produced."

Ducarme also said that food safety controls have been boosted after contaminated eggs were discovered in Belgium last month.

The findings come as the egg contamination scandal continues to widen in Europe where millions of tainted eggs produced in Belgium, the Netherlands and Germany have been recalled for containing fipronil, which is banned under EU law from use on animals destined for human consumption.

Tainted eggs originating from the three countries have been also distributed in Switzerland, Sweden, Britain and France.

Meanwhile, the European Union's executive arm said Tuesday that Belgian authorities took around a month to notify it about the discovery of contaminated eggs, although EU member states are required to do so "immediately."

European Commission spokeswoman Mina Andreeva said that "no information about this contamination incident was provided" until July 20. Tainted eggs were found in Belgium in June.

She said EU states "have a legal obligation" to notify the Commission immediately if they have information about a threat to human health.

Andreeva declined to say more given that a legal probe is underway in Belgium and the Netherlands to establish who knew what and when.

Fipronil is a common ingredient in veterinary products for getting rid of fleas, lice and ticks in animals. It can cause damage to the liver, thyroid glands and kidneys, if consumed in large quantities, though this has only been tested on rats.

In large quantities, fipronil is considered to be "moderately hazardous" according to the World Health Organisation, and can have dangerous effects on people's kidneys, liver and thyroid glands.

EU rules say eggs with a level of fipronil above 0.005 mg per kg must be withdrawn from the market. Fipronil levels above 0.72 mg per kg represent a possible acute health risk, the EU says.

It's believed that fipronil got into the food chain when it was illegally added to a product used to treat poultry for lice and ticks.