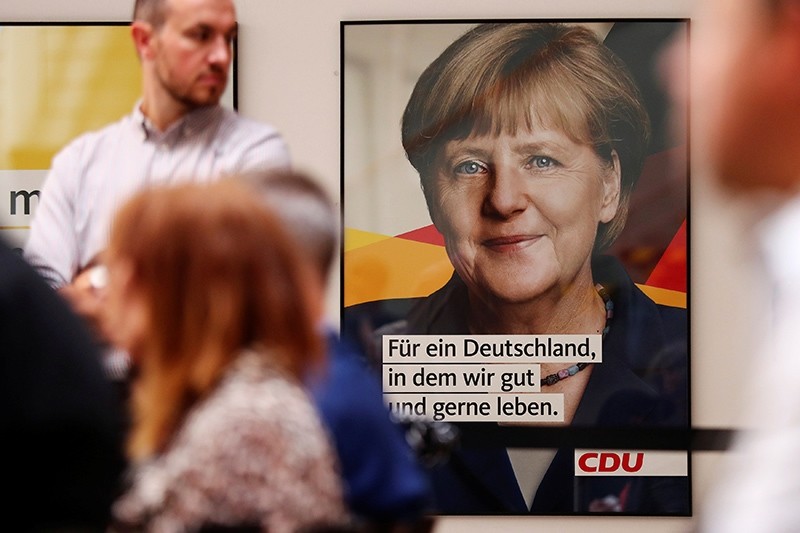 The party Christian Democratic Union (CDU) presents a new poster for the upcoming election campaign with a headshot of German Chancellor Angela Merkel in Berlin, Germany August 7, 2017. (Reuters Photo)
by Aug 10, 2017 12:00 am

German Chancellor Angela Merkel, about to return from holiday, has seen her popularity fall by 10 points just six weeks before an election in which she hopes to win a fourth term.

An Infratest dimap poll published late on Thursday showed that 59 percent of voters think Merkel is doing a good job, down 10 points from the previous month. She trailed her finance minister Wolfgang Schaeuble, who was down 1 point at 64 percent.

However, Merkel has little to fear as her Social Democrat (SPD) rival Martin Schulz hit a new low of 33 percent, down four points from last month.

The SPD has accused Merkel of stifling debate by failing to take a stand on issues and leaving much to her ministers.

Last week, she stayed on holiday rather than attend a summit of ministers and carmaker bosses aimed at mending the auto industry's tattered reputation after an emissions scandal.

Two thirds of Germans think politicians have too lenient approach towards the sector, the poll showed.

"Merkel is rightly accused of staying out of the emotional debates in the election campaign," wrote a commentator in Bild daily, also mentioning issues like the deportation of dangerous migrants, security and asylum fraud.

An attack last month by a 26-year old migrant in Hamburg which left six people hurt shook Germans. The man, born in the United Arab Emirates, was supposed to leave the country but did not have the right identity papers.

Despite all this, Merkel's conservatives, who currently share power with the SPD in a "grand coalition", look on track to win the Sept. 24 vote. The main question for most experts is whether she will repeat her coalition with the SPD or seek another partner, possibly the pro-business Free Democrats (FDP).

Some 49 percent of those asked said they wanted the next government to be led by Merkel's conservative bloc, comprising her own Christian Democrats (CDU) and the Bavarian Christian Social Union (CSU).

The poll put Merkel's conservatives down 1 point at 39 percent and the SPD up one but, on 24 percent, still way behind.