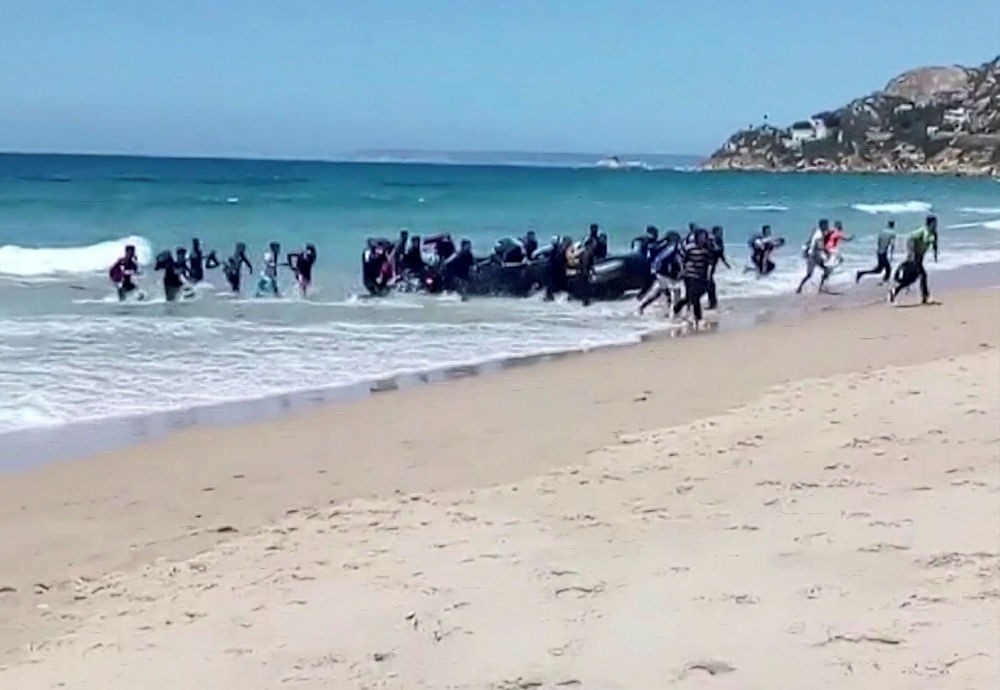 Spain could overtake Greece this year in the number of migrants arriving by sea, the International Organization for Migration (IOM) said Thursday, coming to shore on boats and even jet-skis. According to the IOM's latest figures, until Aug. 6, close to 8,200 migrants had arrived in Spain so far this year.

That is more than triple the number recorded at the same time last year, according to Joel Millman, a senior IOM spokesman, and already more than the total arrivals in 2016.

While the figure pales in comparison with Italy - where more than 96,400 migrants have landed so far this year - Spain is catching up with Greece where 11,713 alighted from boats in the same timeframe. "It's possible that Spain will outperform Greece this year," Millman told AFP. "If so, that's a big change."

He said many people taking the long route toward Europe were from west African countries like Senegal, Gambia, Guinea or Ivory Coast. But to get to Italy, they have to cross the Sahara desert and crucially Libya, wracked by chaos as rival militias and administrations seek to control the oil-rich country. Faced with the danger, some may be deciding to go up along the coast instead.

"We assume that some of the change is due to the fact that the route is considered a safe route up to the coast through Morocco," Millman said.

He added that the boats crossing the choppy sea to Spain were much smaller than those launching from Libya to Italy. In Libya there "appears to be a very deliberate strategy to put people out there, in overloaded boats that begin to take on water almost immediately and then it's a race to see how quickly the people on the boat can summon aid," he said. "Whereas in Spain, the strategy is smaller craft hoping to come in undetected, and undoubtedly some do."

The voyage from Libya across the Mediterranean Sea to Italy remains the most popular route - 95,000 migrants have set sail this year - yet numbers are down compared with 2016, while sea arrivals to Spain from Morocco have tripled.

The U.N.'s new envoy to Libya on Tuesday endorsed an Italy drive to strengthen the Libyan coast guard to ensure boatloads of migrants are intercepted before reaching international waters. Human rights campaigners fear the approach could place thousands of people with a right to asylum at serious risk.

But Ghassam Salame, a former Lebanese culture minister appointed in June to head U.N. operations in Libya, described the cooperation between Tripoli and Rome as a "very constructive" way of dealing with an acute problem.

"It would be absolutely unrealistic to ignore the seriousness of the challenge of irregular migration," Salame said after meeting Italian Foreign Minister Angelo Alfano in Rome. "There are hundreds of millions of them across the world. This is very serious problem."

The number of arrivals from North Africa is likely to increase further due to the good summer weather, said Inigo Villa, head of the disaster management unit at the Red Cross. Smugglers in Morocco offer different options to migrants - the less risky the trip, the higher the price - ranging from toy dinghies to speedboats to jet-skis, with the crossing taking only 30 minutes but costing up to 3,000 euros. Spain's maritime rescue service, which includes ships, planes and helicopters, rescues migrants at sea and takes them to cities such as Almeria, Malaga, Tarifa, with the Spanish Red Cross on hand to offer aid from healthcare to food and water.