Netherlands without government for the last 5 months, parties resume negotiations 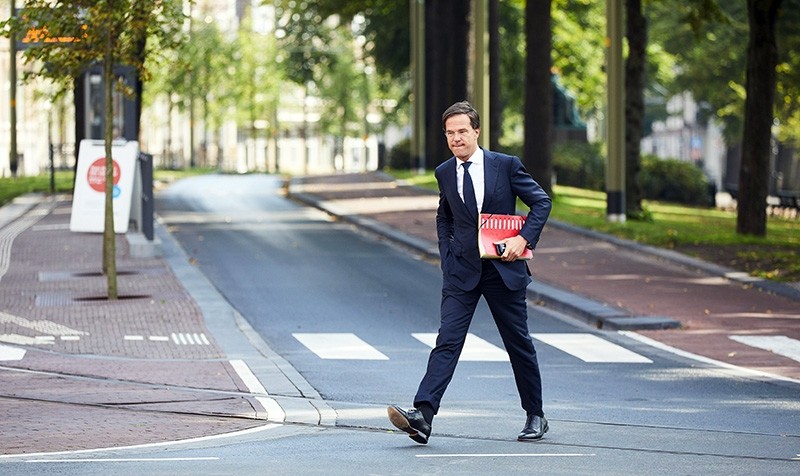 Dutch Prime Minister Mark Rutte arrives, after a short vacation, for the government formation talks at the Johan de Witthuis in The Hague, The Netherlands, Aug. 09, 2017. (EPA Photo)
by Daily Sabah with Agencies Aug 13, 2017 12:00 am

Although five months have passed since the Dutch general elections on March 15, marked with rising populism and a diplomatic spat with Turkey during election campaigns, parties still resume negotiations to come up with a cabinet that would exclude the far-right Freedom Party (PVV).

Center-right and center parties, which include Prime Minister Mark Rutte's People's Party for Freedom and Democracy (VVD), Christian Democratic Appeal (CDA) led by Sybrand Buma, Democrats 66 (D66) led by Alexander Pechtold and Christian Union (CU) led by Gert-Jan Segers, came together Saturday for a renewed round of negotiations that was launched Wednesday after a three-week-long break.

As of Sunday, 151 days have passed without a government in the Netherlands, where coalition governments and arduous negotiations are common. It took Rutte 54 days in 2012 to form his coalition, but the record still stands at 208 days from 1977.

All negotiating parties have 76 seats combined and will reach the majority with 150-seats , which is the threshold to form the government in the Dutch parliament. Rutte's VVD won 33 seats in the elections, CDA and D66 won 19 seats each, whereas the CU holds five seats.

Zalm stated that leaders of social-liberal and pro-Europe D66 and social-conservative and Eurosceptic CU came together for the first phase of talks to overcome differences in a broad range of issues.

D66's Pechthold said that there are great distances to be covered between D66 and CU over immigration, refugees, global climate change and liberal values. It is not helpful to meet halfway on tough issues such as these, he said, but it is possible to agree on D66's stance in several issues and on CU's stance for several others.

Whereas CU's Segers said that deals on finance are possible but an agreement over principles are not.

All political parties in the Netherlands exclude a coalition option with the far-right PVV, led by anti-Islam populist Geert Wilders (L), which came second in elections and holds 20 seats in the parliament.

Political experts expect that the budget talks, which take place every year the third Tuesday of September, will be carried out under an interim government.

On Wednesday, Rutte said a new government will be put together "as quickly as possible."

"But I don't want to put time limit on it," he told reporters outside a venue in central The Hague where the talks are being held.

A first attempt to include the left-wing ecology-based GroenLinks (GL) party in a four-way coalition broke down in May amid differences over immigration, leaving a political stalemate and causing the first person tasked with trying to form a government to step down.

A second person also stepped down after failing to get a cabinet together but he did manage to find three willing partners to rule with Rutte in a coalition government.