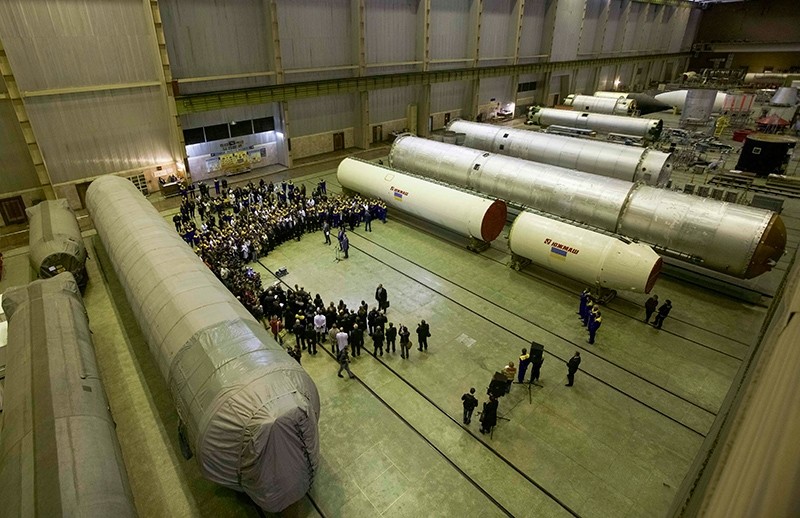 A general view shows a workshop of the factory Yuzhmash during Ukrainian President Petro Poroshenko's visit in Dnipro (Dnipropetrovsk), Ukraine, October 21, 2014. (Reuters Photo)
by Aug 14, 2017 12:00 am

Ukraine denied Monday that it had ever supplied missile technology to North Korea, responding to an article in the New York Times that said North Korea may have purchased rocket engines from Ukrainian factory Yuzhmash.

Concern that North Korea is close to achieving its goal of putting the mainland United States within range of a nuclear weapon has raised global tensions in recent weeks. The United States is a key backer of Ukraine.

The secretary of the Ukrainian Security and Defense Council, Oleksandr Turchynov, said Ukraine "has never supplied rocket engines or any kind of missile technology to North Korea."

State-owned Yuzhmash said it had not produced military-grade ballistic missiles since independence from the Soviet Union in 1991.

"In the years of independence, Yuzhmash has not produced, and is not producing, missiles and military missile systems," it said in a statement published on their company's website.

President Donald Trump warned at the weekend that the U.S. military was "locked and loaded" if North Korea acted unwisely after threatening last week to land missiles near the U.S. Pacific territory of Guam.

North Korean officials in turn have accused the U.S. leader of driving the Korean peninsula to the brink of nuclear war.

On Sunday, the head of the U.S. Central Intelligence Agency said he would not be surprised if North Korea tested another missile, after it conducted two tests in July.