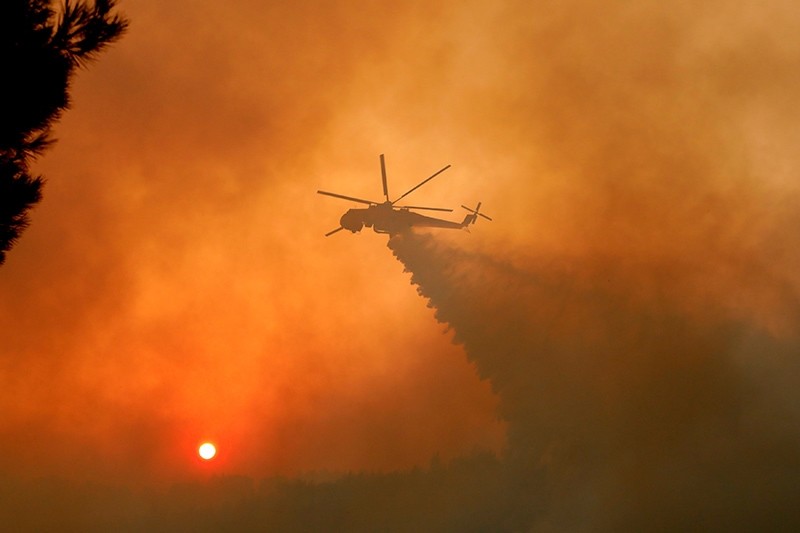 More than 500 firefighters, soldiers and volunteers with three airplanes and four helicopters were engaged Tuesday in an effort to subdue fires north of Athens.

Wind, which threatens to rekindle and spread the hundreds of smaller fires, and the rough, heavily forested terrain in the area of Kalamos, Kapandriti and Varnavas have complicated the effort.

The army was called in to assist firefighters around Kalamos, 45 kilometres (30 miles) east of Athens, where a fire has been burning since Sunday.

At least five properties were destroyed and several homes evacuated, authorities said, as smoke from the blaze clouded the sky in the capital on Tuesday morning.

More than 90 fires broke out across Greece since Sunday, according to authorities.

Firefighters were also battling flames near the town of Amaliada in the western Peloponnese and on the tourist hotspot island of Zakynthos, where several fires -- some thought to have been started deliberately -- were raging.

"Such a situation is unheard of," regional fire chief Vassili Matteopoulos told local media on Monday.

Efforts to control the blazes were complicated by winds reaching speeds of 40-50 kilometres per hour, according to the fire service.

Soaring temperatures and tinder-dry forest floors across southern Europe have led to a rash of devastating wild fires, notably in Portugal, where 64 people died in a massive inferno in June.

Southeastern France and Corsica have also been affected.

In Portugal on Tuesday, some 1,450 firefighters were tending to least four blazes in the central Santarem and Castelo Branco regions, the emergency services said.