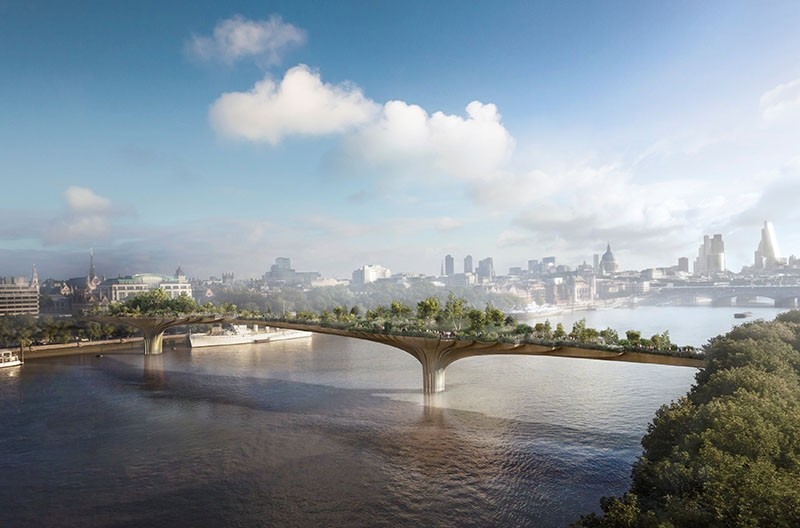 The proposed Garden Bridge is seen spanning the River Thames in this artist impression received via the Garden Bridge Trust in London (Reuters Photo)
by Associated Press Aug 15, 2017 12:00 am

Supporters of a proposed footbridge and public garden spanning the River Thames in London abandoned the project Monday after support from the city withered away.

The trust established to build the Garden Bridge, which would have linked Temple with South Bank, shut down after failing to secure guarantees for annual maintenance costs.

"It is a sad day for London because it is sending out a message to the world that we can no longer deliver such exciting projects," the trust's chair, Mervyn Davies said.

London Mayor Sadiq Khan had refused to allocate more public money to the idea, despite the support of predecessor Boris Johnson. Khan's refusal followed an independent report critical of the project.

The report by Margaret Hodge, the former chair of Parliament's Public Accounts Committee, concluded there was too much uncertainty about the final cost and it was "difficult to justify further public investment."

Khan said it was his duty to act, arguing that no more money should be spent on a project whose delivery was uncertain. Khan said that he had given the trust time to address "multiple serious issues" with the project.

"Londoners will, like me, be very angry that London taxpayers have now lost tens of millions of pounds — committed by the previous mayor on a project that has amounted to nothing," Khan said.