| Photo Credit: Paradies hotel website
by Compiled from Wire Services Aug 15, 2017 12:00 am
A Swiss hotel that posted signs telling Jewish clients to shower before using the pool and restricting their access to the facility's freezer has unleashed outrage and official complaints from Israel.

The Paradies apartment hotel in the Alpine village of Arosa in eastern Switzerland is being accused of anti-Semitism after an outraged guest posted to Facebook a picture of a notice plastered outside the hotel pool.

"To our Jewish Guests, women, men and children, please take a shower before you go swimming," it said, adding that "If you break the rules I'm forced to (close) the swimming pool for you." 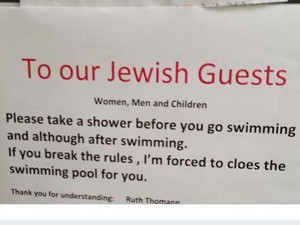 A second notice, in the kitchen, meanwhile instructed "Our Jewish guests" that they could only access the facility's freezer between 10 and 11 am and between 4:30 and 5:30 pm.

"I hope you understand that our team does not like being disturbed all the time," it said.

Paradies manager Ruth Thomann, who signed the notices, insisted to Swiss daily 20Minutes that she was not an anti-Semite, and acknowledged that her "choice of words was a mistake."

She explained to the Blick daily that the apartment hotel currently had a lot of Jewish clients, and that other guests had complained that some of them did not shower before using the pool and had asked her to do something.

"I wrote something naive on that poster," she was quoted as saying, admitting that it would have been better to simply address all guests with the same message.

The hotel is reportedly very popular with ultra-orthodox Jewish guests because it has been accommodating to their needs, including access to a freezer to store kosher food.

Thomann told Blick that the since the freezer was in the staff room, she had felt compelled to set times when the Jewish guests could access it to ensure staff could enjoy their "lunch and dinner in peace."

The story quickly made the rounds on social media and was published by Israeli papers, prompting a harsh reaction from Israeli officials.

Deputy Foreign Minister Tzipi Hotovely described the incident as "an anti-Semitic act of the worst and ugliest kind."

Israel's ambassador to Switzerland, Jacob Keidar, reportedly contacted the hotel and informed Hotovely the signs had been removed.

But she was not satisfied and has reportedly demanded "a formal condemnation" from Bern.

Swiss Tourism spokesman Markus Berger on Tuesday called the sign "unacceptable," adding it has been removed and hotel management has apologized.

Berger cited a trend among some Orthodox Jews of summer travel to the area.