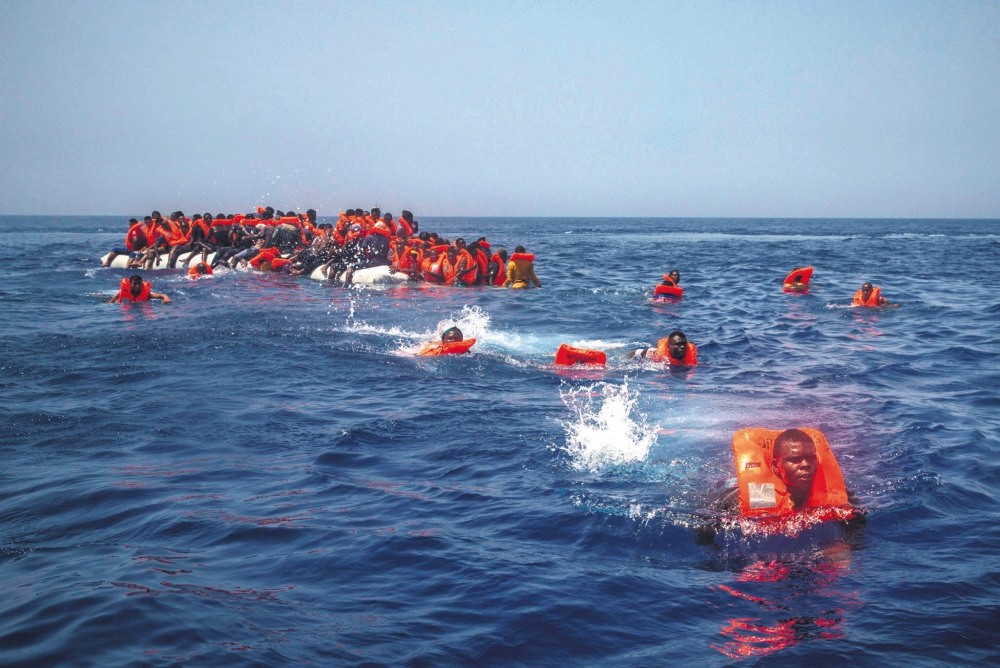 African migrants try to reach a Spanish NGO Proactiva Open Arms rescue ship after falling from a punctured rubber boat in the Mediterranean Sea, about 12 miles north of Sabratha, Libya, July 23.
by Daily Sabah with Wires Aug 17, 2017 12:00 am

A new code of conduct imposed on NGO's rescue operations for migrants and refugees in the Mediterranean Sea could result in more deaths, a U.N. expert warned on Tuesday.

Rome and the European Commission "are imposing procedures that could reduce the ability of NGOs to carry out life-saving activities" through the new code of conduct, Agnes Callamard, the U.N. special rapporteur on extrajudicial, summary or arbitrary executions.

"This could lead to more deaths at sea," said Callamard, "and the resulting loss of lives, being foreseeable and preventable, would constitute a violation of Italy's human rights obligations."

Italian and EU plans to give money to the Libyan coast guard to catch more migrants are problematic, as Libyans have been known to shoot at migrant vessels, and migrants in Libya risk murder, torture, malnutrition and medical neglect, she also stated.

"No matter how much the support of the European Commission or others is needed, it must not lead to further abuses of migrants and refugees," she said, adding that this would be the direct opposite of the right to life, and the antithesis of search and rescue.

Amid growing human rights concern, migrant arrivals to Italy are decreasing as the country adopts controversial policies to solve the crisis. After a surge in migrant arrivals from Libya at the start of the year, the numbers have slowed. Data from the Interior Ministry on Tuesday showed that 97,293 people had reached Italy so far in 2017, down 4.15 percent from the same period in 2016.

"Managing migration flows is very hard, but it is not impossible," Minniti told a press conference on Tuesday. "For the first time, I am starting to see the light at the end of the tunnel."

The drop in numbers comes amid controversial Italian decisions to launch a naval mission in Libyan waters to support the coast guard there, and regulate sea rescues by non-governmental organizations through a code of conduct.

The subject of immigration is dominating Italy's political agenda ahead of general elections due before May next year, with public opinion increasingly hostile to migrants. Almost 600,000 migrants have arrived in Italy over the past four years.

Minniti's center-left Democratic Party will be battling with rivals who call for even tougher migration policies: conservatives led by former premier Silvio Berlusconi and the populist Five Star Movement (M5S). "Migration flows that are not managed are a threat to the social and democratic stability of Italy," Minniti said, also urging EU partners to donate more to stabilize Libya and secure its southern border with Niger.Italian Prime Minister Paolo Gentiloni is likely to raise the issue at an Aug. 28 meeting in Versailles with French President Emmanuel Macron, German Chancellor Angela Merkel and Spanish Prime Minister Mariano Rajoy, Minniti said.