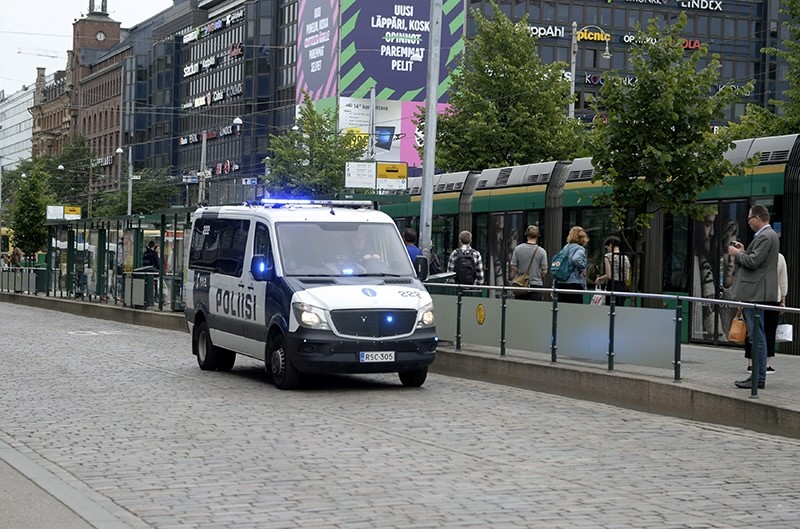 Finnish police patrol the streets, after stabbings in Turku, in Central Helsinki, Finland August 18, 2017. (Linda Manner via Reuters)
by Daily Sabah with Wires Aug 18, 2017 12:00 am

At least six people were left wounded and two people are dead following stabbings at the Puutori-Market Square in the Finnish southwestern city of Turku, Finnish police said Friday.

South-West Finland police said on Twitter a security operation was underway in the city center, and asked people to avoid the area. A strong police presence and some ambulances were reported in the market square.

One suspected perpetrator was shot in the leg and taken into custody, the police said. The number of attackers is unclear as there are conflicting reports.

Finnish police said they were looking for other "possible suspects" after the stabbing spree.

Police did not confirm the number of victims, but local media reported at least one dead, while photos on social media showed a covered body lying on the ground.

Tabloid Ilta-Sanomat says six people were injured, one man and five women, and that a woman with stroller was attacked by a man with a large knife.

"The government is following the situation in Turku closely and a police operation is under way," tweeted Prime Minister Juha Sippila ahead of a cabinet meeting.

Finnish police said they have reinforced security at Helsinki Airport and train stations throughout the country.

The man who approached him carrying a knife was found to be psychologically disturbed and no charges were brought against him.