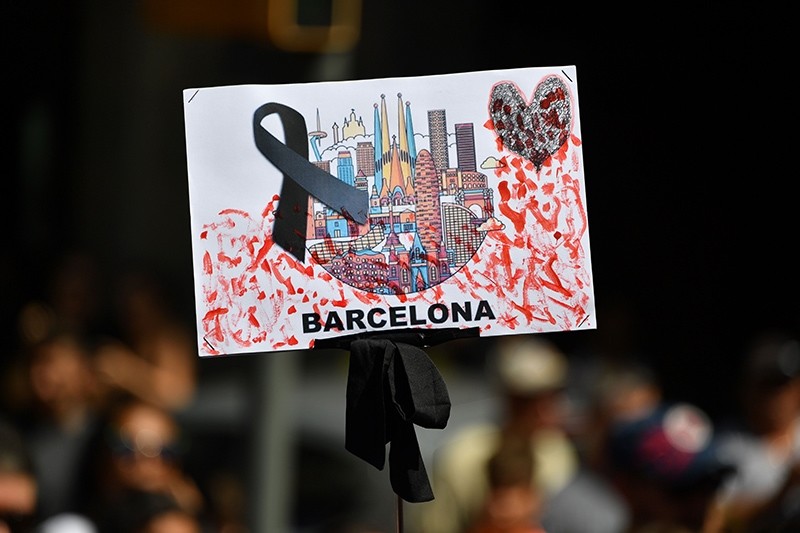 A placard with black ribbon is brandished before observing a minute of silence for victims of attack at Plaza de Catalunya on Aug. 18, 2017, day after van plowed into crowd, killing 13 people and injuring over 100 in Barcelona, Spain. (AFP Photo)
by Daily Sabah Aug 18, 2017 12:00 am

An Australian woman got caught up in a third terrorist attack in just three months after a van plowed into the crowd on one of Barcelona's busiest thoroughfares on Thursday, killing 13 people and injuring 100.

Julia Monaco was shopping with her friends at Placa de Catalunya mall in the center of Las Ramblas district when the attack claimed by the Daesh terrorist group took place.

In an interview with Australian radio station 3AW, the 26-year-old woman said they were suddenly locked in the shop, and 'confusion started to sprinkle among the people' as the attack went underway.

"The next second we knew we were literally running for our lives to the very back of the store where we were told to get on the ground away from the windows and lay as flat as possible," Monaco said.

Monaco added that she did not see the van, but saw people "who had clearly seen something terrible happen," running and screaming.

In June, the Australian woman was placed on lockdown on the London Underground when terrorists plowed into people on the London Bridge before going on a stabbing spree.

Couple of days later, Monaco was visiting Paris, where she was at Notre Dame the day a police officer was stabbed outside the famous cathedral.

Despite her "luck" for being in the wrong place at the wrong time – and yet surviving –, Monaco is determined to keep traveling the world.

"[I] still want to travel the world. Maybe there's something wrong with me, but I'm still going," she said.