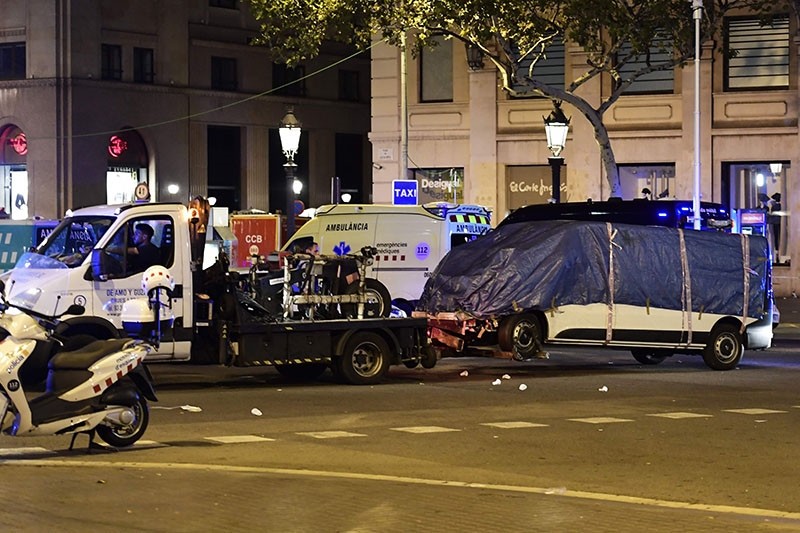 A 33-year-old Turkish national was among those wounded in Thursday's terrorist attack in central Barcelona, Turkey's embassy in Madrid confirmed on Friday.

Emre Eroğlu, a Turkish man in Spain on business, suffered two broken legs when a white van was driven through crowds of pedestrians in what the authorities are calling a terrorist attack.

However, Eroğlu's injuries are not thought to be life threatening, the Turkish embassy told Anadolu Agency.

At least 14 people were killed and more than a hundred injured in the attack in Barcelona.

The driver of the vehicle is still on the run, but police have made three arrests in connection with the attack.

Spanish police also shot and killed five suspected terrorists in a later operation in Cambrils town, close to Barcelona, after a vehicle was driven into a crowd.

One woman was killed and six people, including police, were injured when the vehicle drove into them in the early hours of Friday morning.

Local emergency services say 34 different nationalities are among those killed or injured.

Turkey's President Recep Tayyip Erdoğan offered his condolences to Spain's King Felipe on Thursday following the attacks which he said "showed the brutal face of terrorism once again".

In a written statement Turkish Foreign Ministry condemned the attack, saying that Turkey will maintain solidarity with Spain, which is a friend and an ally of Turkey.

"We extend our deepest condolences and wish fortitude to the families of those who lost their lives and speedy recovery to those wounded in these heinous attacks which display once again the brutal face of terrorism and target all humanity," the statement said.

A minute's silence was held in Barcelona earlier on Friday, attended by Spain's Felipe VI and Prime Minister Mariano Rajoy.

Security across several Spanish cities has been tightened.

According to local media, police are searching for a man named Moussa Oukabir, believed to be the brother of Driss Oukabir one of the attack suspects arrested in Ripoll, some 50 kilometers (31 miles) north of Barcelona.