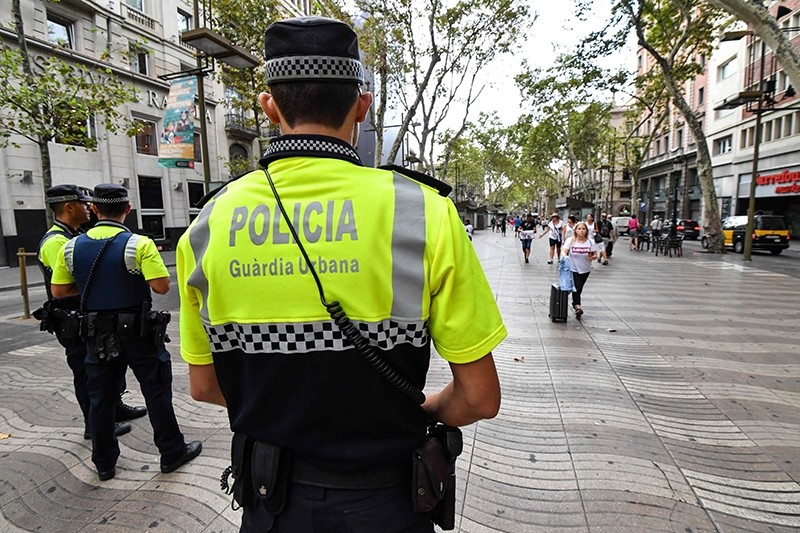 Police officers stand guard on the Las Ramblas boulevard in Barcelona on August 19, 2017, two days after a van ploughed into the crowd (AFP Photo)
by French Press Agency - AFP Aug 20, 2017 12:00 am

Police said Sunday they have found more than 120 gas canisters in a house in Alcanar, where suspects of this week's twin assaults in Spain were believed to be building bombs for "one or more" attacks in Barcelona.

"We're starting to see clearly that (the Alcanar house) was the place where they were preparing explosives for one or more attacks in the city of Barcelona," police chief of Catalonia region Josep Lluis Trapero told journalists.

On the eve of the attack in Barcelona, an explosion had occurred at the house about 200 kilometers south of the city, and police believe it was detonated in error by the suspected terrorists.

Meanwhile, police do not know if the man suspected of driving the van used in a deadly vehicle attack in Barcelona is still in Spain, the regional police chief told journalists.

"If we knew that he was in Spain and where, we would go after him. We don't know where he is," said Josep Lluis Trapero, referring to 22-year-old Younes Abouyaaqoub.

The police added that they could not rule out that he had slipped over the border into France.

Authorities said security operations were under way in Catalonia and on the French border as they try to find Moroccan-born Younes Abouyaaqoub, 22, who they believe is the only one of 12 suspects still at large.

Others have been arrested, shot by police or killed in an explosion at a house in Catalonia a day before Thursday's van attack on Las Ramblas, Barcelona's most famous boulevard.

"We don't have any specific information on this but it cannot be ruled out," Catalan police chief Josep Lluis Trapero told a news conference in Barcelona when asked if Abouyaaqoub could have crossed into France.

Spanish media have said Abouyaaqoub was suspected of being the driver, who fled after the attack. Trapero said he could not confirm who was driving, but said investigators believed only one person was in the van.