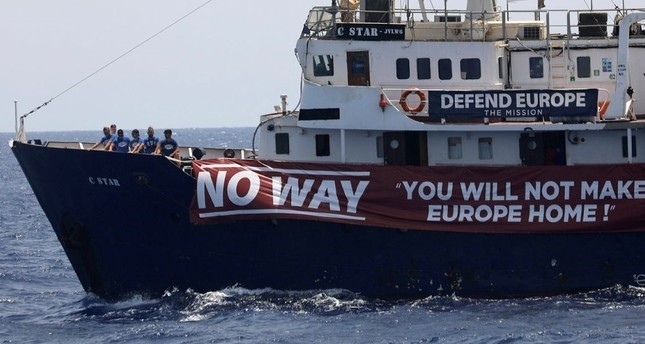 A far-right European group has hailed as a success its bid to stop humanitarian organizations from rescuing migrants in the Mediterranean but ended its trouble-plagued voyage stranded at sea.

Operation Defend Europe came to an abrupt end this week after more than a month at sea in the chartered ship C Star. Malta refused to let its vessel dock on Saturday and it was unable to dock in Sicily earlier. Tunisia banned it from its shores, and it met repeated counter-protests by activists arguing that Defend Europe is spreading hate.

Still, its representatives labeled the operation a success at a Saturday news conference in Lyon, France, where Generation Identity, the sponsors, have a powerful chapter.

The European youth movement calls aid groups "sea taxis" for rescuing migrants sent to sea by Libyan smugglers in flimsy boats, saying they are contributing to the "invasion" of Europe.

The C Star, which set out from Djibouti in July, appeared east of Malta Saturday at a standstill on a commercial marine trafficking website. In a Facebook message, the group denounced Malta as "the headquarters for NGO sea taxis" and a "gate for illegal immigration" while refusing entry to Europeans — meaning the anti-migrant activists on the C Star. Crew members whose faces have been made public include a Frenchman, an Italian, two Germans and an Austrian. The message said the vessel would try to berth in France or Croatia instead.

Romain Espino, a French member of Generation Identity, credited Libya's decision to keep aid organization ships away from its coast for scaring NGOs out of the waters. Several aid groups said last week the coast was becoming too dangerous and pulled out.

"The main objective ... was reached," Espino said Saturday at a news conference with other European colleagues. The mission he said was therefore "temporarily" suspended.

The Defend Europe mission was the highest profile operation of the Generation Identity youth movement, which occupied a mosque in 2012 in Poitiers and last year unfurled banners atop the Brandenburg Gate in Berlin.

Malta said that the C-Star, the ship chartered by far-right group Defend Europe, was not welcome on the island, prompting a furious reaction from the anti-immigration campaigners.

"While Daesh terrorists are welcomed back to Europe without any problem, patriotic activists are being locked out of their own continent," according to a statement posted on social media.

A government spokesman said the boat had not asked to dock in Malta, a request he indicated would have been rejected. "They wanted to purchase services from here. There was never any kind of emergency," the spokesman told AFP. "We do not want to be associated with that ship and we would not have it enter our shores because we disagree with all it stands for."