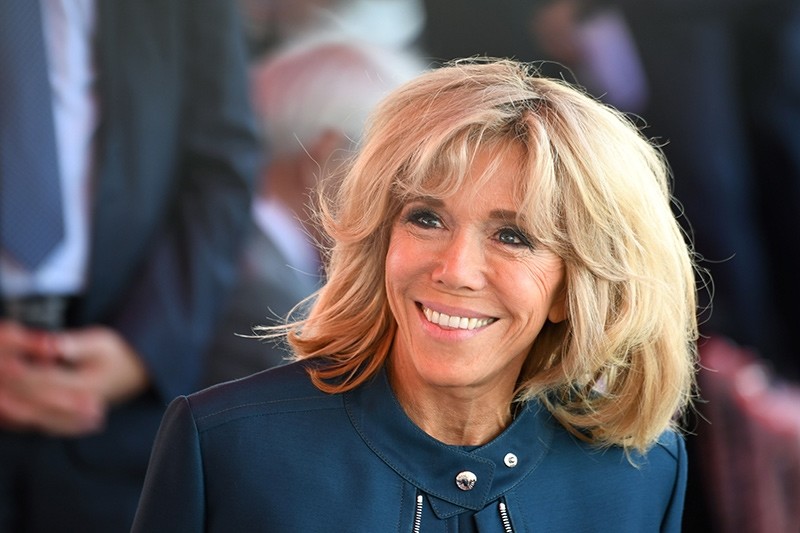 This file photo taken on July 14, 2017 shows Brigitte Macron (C), wife of French President, smiling ahead of the start of the annual Bastille Day military parade on the Champs-Elysees avenue (AFP Photo)
by Compiled from Wire Services
Aug 21, 2017 12:00 am

The French presidency said Monday that Brigitte Macron, the wife of President Emmanuel Macron, would have a official role representing France but would not be paid or have her own budget or staff.

The role of President Emmanuel Macron's wife has been a controversial topic in recent weeks, with more than 300,000 people signing a petition on the website change.org against giving her any official status.

A statement from the presidency said she would "represent France at her husband's side during international summits and meetings" and would also organize meetings at the Elysee Palace.

During his election campaign, Macron said he wanted a "framework" for the role of the president's spouse to be defined.

The "transparency charter" published by the Elysee on Monday states that Brigitte Macron will not receive an official salary or be granted any budgetary allocation.

She will, however, have two advisers from Macron's own office at her disposal, as well as a secretarial service.

The arrangements are in practice similar to those unofficially adopted for the wives of previous presidents.

Brigitte Macron's role will include working with other spouses of heads of state to combat climate change and violence against women.

She will also act as a liaison for the Elysee with voluntary organizations working on disability issues, education, health, culture, protection of children and sexual equality.

That work will take place "in the framework of the priorities set out by the President of the Republic for his term of office," according to the charter.

The Elysee website will also list her main engagements and she will report regularly on her activities, the charter says.