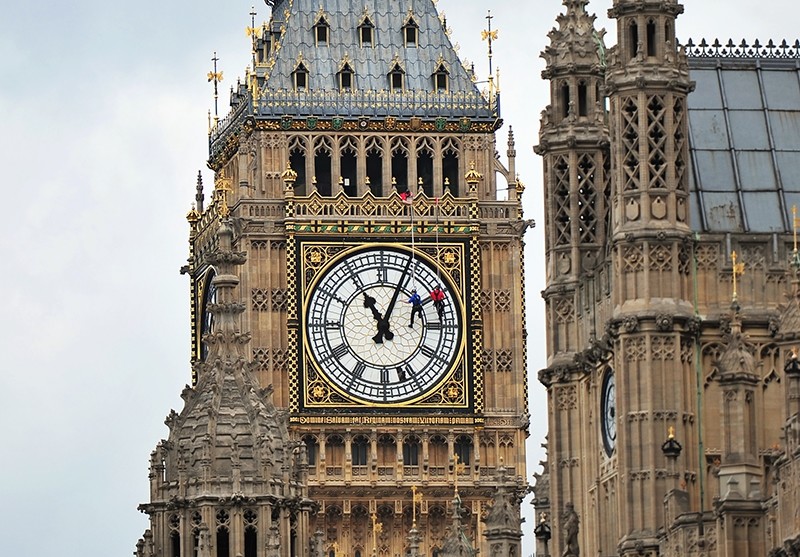 After more than 150 years as Britain's most famous timekeeper, London's Big Ben bell fell silent Monday for four years of repair work that will keep it quiet on all but a few special occasions.

The giant bell atop Parliament's clock tower sent a dozen deep bongs into a gray sky at noon, marking the hour as it has done almost continuously since 1859. It is not due to resume its regular duties until 2021.

Hundreds of parliamentary staff, journalists and lawmakers gathered in a courtyard under the Victorian clock tower to mark the moment, while hundreds more tourists and passers-by lined sidewalks and filled nearby Parliament Square, cellphones held aloft.

The mood was light-hearted — it is, after all, just a bell — but total silence fell as the first bong sounded. The crowd burst into cheers and applause as the last faded away, and bells at nearby Westminster Abbey pealed a noisy farewell to their neighbor.

The bell is being stilled to allow workers to carry out much-needed maintenance to the clock and clock tower without being deafened. But a handful of lawmakers have criticized the lengthy silence, calling Big Ben an important symbol of British democracy. Prime Minister Theresa May said last week that "it can't be right for Big Ben to be silent for four years."

"I can see it from where I live. I do live my life by it," said Denise Wiand, one of the spectators, who lives across the River Thames.

"I'm 72 and I'm worried it might be the last time I actually hear them!" she said.

Thomas Moser, a 54-year-old German tourist, said: "The crowd were really listening. We are here, we want to hear every single sound."

The bongs are a venerated marker of British life, used at the start of radio and television newscasts, and a focus for national occasions and the midnight countdown to New Year's Day.

The sound is also familiar beyond Britain, as it is broadcast on the BBC World Service.

The bell is housed in the Elizabeth Tower, which looms over the Houses of Parliament and is one of Britain's most popular tourist attractions.

The bells are being stopped due to fears that prolonged exposure to the 118-decibel bongs from the 13.7-tonne Big Ben could damage the hearing of renovation workers.

The 96-meter (315-foot) tower is the most photographed building in Britain. The renovation is estimated to cost £29 million ($37 million, 32 million euros).

A YouGov poll published Saturday found that 41 percent of Britons believe Big Ben should continue operating as normal, while 44 percent agreed that it should be silenced during the renovations.

Some tourists sat on picnic blankets to witness the final bongs, while others filmed them on their phones or stood in silence by the statue of World War II prime minister Winston Churchill.

The bells of Westminster Abbey pealed afterwards to say farewell to their neighbor.

"It's sad to us because that is our history. That belongs to this great city," said George Major, 80, the Pearly King of Peckham in south London.

"Why do they keep knocking London and taking our history away? It's not right."

In response to the criticism, House of Commons officials have said they will take another look at the repairs schedule once Parliament returns next month from its summer break.

Labour Party lawmaker Stephen Pound said it was sad to see the silencing of "the chimes of freedom."

"You don't know what you've got till it's gone," he said.

And Pound expressed skepticism that the repair work would be finished on schedule in 2021.

"Dream on," he said. "Have you known any government project ever come in on time and on budget?"

Under current plans, the bell would still ring on Remembrance Sunday in November, which commemorates Britain's war dead, and New Year's Eve.

"It was rather like a minute's silence," Peter Bone MP said after Monday's farewell.

He is among the MPs demanding that the clock swings back in action on the eve of March 29, 2019, when Britain is due to leave the European Union.

"It's absolutely essential that the bell rings to celebrate the return of power to Westminster," he added

Big Ben has been silenced by malfunction and for repairs before, most recently in 2007, but this stretch is by far the longest.

"Parliament and the clock tower and Big Ben are just iconic parts of London and Great Britain and so it's very exciting to be out here and see it," said Mitchell Polay, visiting one day recently from Yonkers, New York. "In the States when you think of England, that's one of the first things that pop up into your mind."

He felt there must be a way to keep Big Ben bonging.

"We have an international space station," Polay said. "I'm sure they could figure out a way to make a bell ring and not damage the hearing of the workers."

During the repair work, scaffolding will obscure parts of the tower, and the clock faces will be covered at times — though at least one face will always be visible.

Adam Watrobski, principal architect at the Houses of Parliament, said authorities are well aware of how much interest the bell and the tower generate.

"But you know at the end of the day all buildings have to be serviced," he said.

Watrobski added that once this round of work is finished, "the building will be sound and secure for the next 60 years or so."