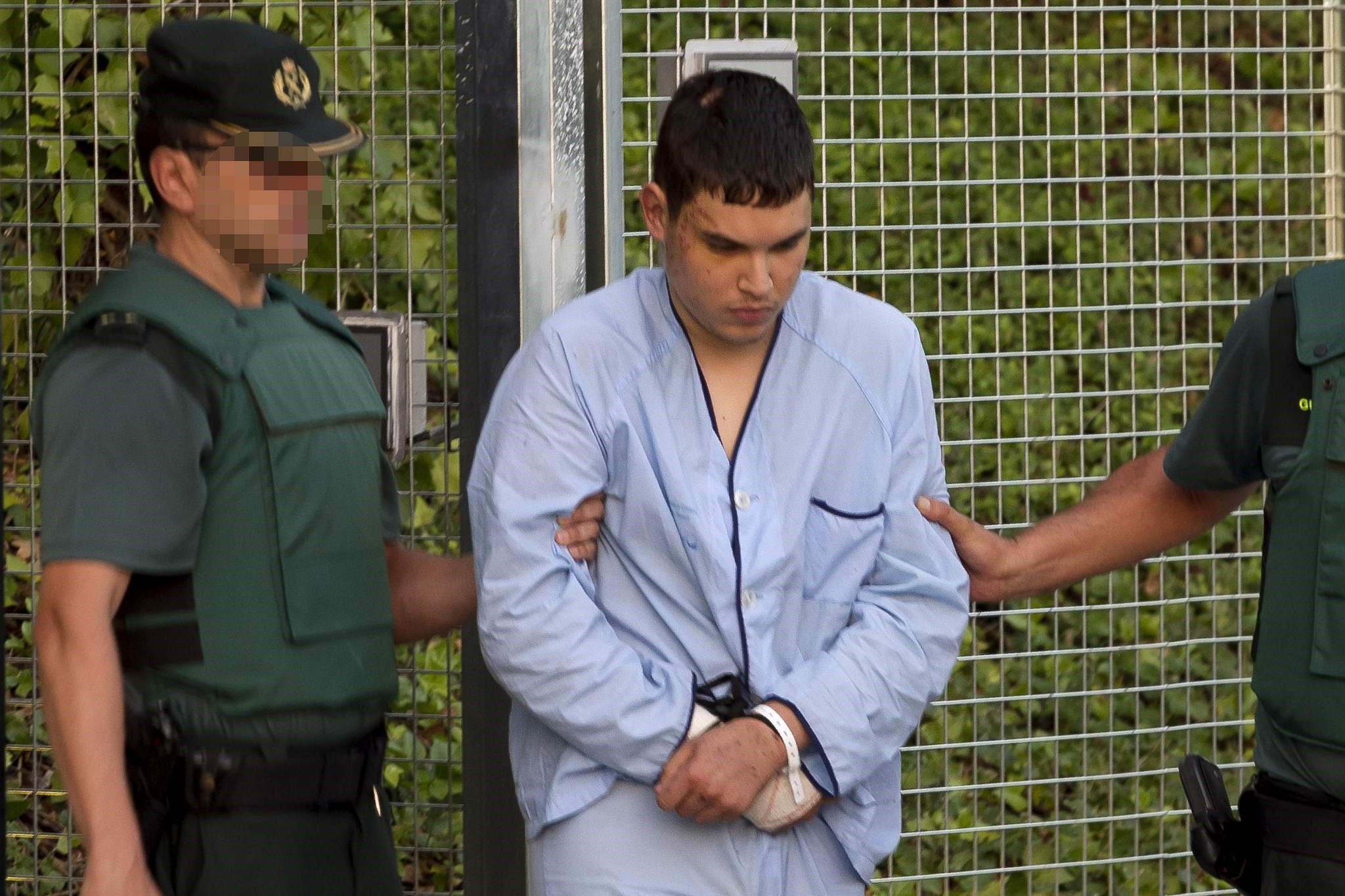 Mohamed Houli Chemlal, suspected of involvement in the terror cell that carried out twin attacks in Spain, is escorded by Spanish Civil Guards from a detention center in Tres Cantos, on August 22, 2017. (AFP Photo)
by Compiled from Wire Services Aug 22, 2017 12:00 am

Mohamed Houli Chemlal, an alleged member of the terror cell that unleashed carnage last week in Spain, admitted to a judge Tuesday that he and the other suspects had planned a bigger attack, a judicial source told AFP.

The judge overseeing the case sent two suspects to jail, and said one suspect will be detained for another 72 hours while the fourth is freed.

Chemlal, who was injured in an accidental explosion at a makeshift bomb factory believed to have precipitated the attacks, confessed to police and a judge questioning him in a Madrid court, said the source, who refused to be named.

Police had previously revealed that the suspects had been preparing bombs for "one or more attacks in Barcelona".

Josep Lluis Trapero, head of police in Catalonia, said 120 gas canisters and traces of TATP components -- a homemade explosive that is a hallmark of Daesh who claimed the attacks -- had been found at their bomb factory.

The accidental explosion in the house in Alcanar, south of Barcelona, may have forced the suspects to modify their plans.

Alongside Chemlal, the three other suspects in court included Driss Oukabir, the older brother of Moussa who was killed by police in Cambrils on Friday along with four other suspects.

The others were Mohamed Aallaa, one of three brothers allegedly involved, and Salh El Karib, who manages a store that allows people to make calls abroad.

Chemlal was born in Melilla, one of Spain's two North African coastal enclaves that have borders with Morocco. Spanish media say the other 11 suspects are mostly or all Moroccans that lived in Spain.

Chemlal, dressed in hospital patient clothing and with his right hand bandaged, was brought in after a doctor determined that he was fit for interrogation, a court spokesman told AFP.

Veteran magistrate Fernando Andreu is due to determine which charges to file against the four men and what role they may have played in the terror plot.

The lone fugitive from the cell — 22-year-old Younes Abouyaaqoub — was shot to death Monday after he flashed what turned out to be a fake suicide belt at two police who confronted him in a vineyard not far from the city he terrorized.

Police said they had "scientific evidence" that Abouyaaqoub drove the van that barreled through Barcelona's crowded Las Ramblas promenade on Thursday, killing 13 people, then hijacked a car and fatally stabbed its driver while making his getaway.

Abouyaaqoub's brother and friends made up the rest of the 12-man extremist cell, along with an imam who was one of two people killed in the house explosion in Alcanar.

Police said with Abouyaaqoub's death, the group responsible for last week's fatal van attacks are all dead or in custody. Five were shot dead by police early Friday in Cambrils, where a second van attack left one pedestrian dead hours after the Barcelona van attack.

While Catalan police say the cell has been dismantled, investigators are trying to determine if it had logistical or other forms of support from other individuals.

Questions are also arising about the group's possible international connections.

In Belgium, the mayor of the Vilvorde region told AFP that Satty spent time in the Brussels suburb of Machelen -- next to the city's airport -- between January and March 2016.

On the other side of Brussels, the Molenbeek suburb has gained notoriety as a hotbed of international extremists after the Brussels bombings in March 2016 and the Paris attacks in November 2015.