Spain suspects were in Paris 2 days before Barcelona attacks 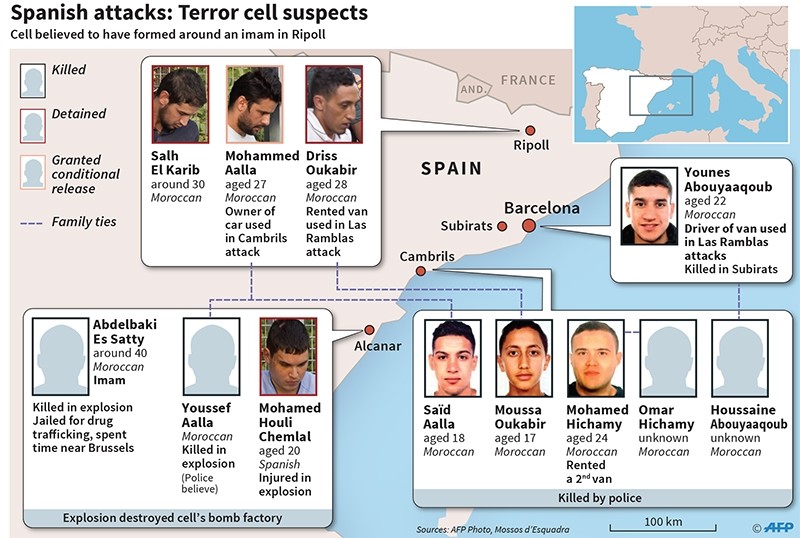 Some of the Spain terror suspects spent a night in France a week before the fatal attacks in and near Barcelona, French authorities said Wednesday as police in Spain revealed they found a real suicide bomb belt in the house where the attackers tried to make explosives.

An Audi A3 car that was observed in France on Aug. 11-Aug. 12 is the same one involved in the attack carried out in the seaside town of Cambrils in the early hours of Aug. 18, anti-terrorism prosecutor Francois Molins said. A woman was killed there, and police fatally shot five suspects.

French investigators are working "very closely" with Spanish colleagues "to determine the precise reasons for this lightning trip...and if the terrorists were in contact with other people on (French) territory," Molins said.

Separately, a French police official with knowledge of the investigation said several men who arrived in the Audi stayed at a hotel in the southern Paris suburb of Malakoff, visited a shopping center and bought a camera before leaving. The official was not authorized to discuss the ongoing investigation by name.

In Spain, police disclosed that a belt charged with explosives was among the evidence discovered in the rubble of the house south of Barcelona. An explosion there on the eve of the deadly Barcelona van attack derailed the suspects' initial plans to bomb important city sites, according to court documents.

Six of the attackers shot dead by police — the five in Cambrils and one Monday — were wearing fake suicide belts.

It wasn't immediately clear if the belt was meant to be used by the imam, Abdelbaki Es Satty, who was killed in the house explosion and allegedly masterminded the attacks, according to the two jailed survivors. One of the suspects told a judge that Es Satty intended to blow himself up when the group struck Barcelona monuments.

Police had already found at the house more than 100 tanks of butane gas, nails that they planned to use as shrapnel, and 500 liters of acetone, a highly flammable liquid necessary to make TATP, an explosive used by Daesh militants.

Thirteen people were killed Thursday when a van zig-zagged through Barcelona's Las Ramblas promenade. A 14th was stabbed to death by the van's driver as he made his getaway.

A 15th victim was killed when the Cambrils attackers, armed with knives, drove the Audi onto a pedestrian path.

French Interior Minister Gerard Collomb said the car was flashed for speeding outside Paris before the attacks.

"We are working to determine why the authors of the attacks came to Paris and what they did in the Paris region," Collomb said Wednesday, standing next to his Spanish counterpart, Juan Ignacio Zoido.

Zoido stressed the need for strengthening international anti-terrorism cooperation to prevent future attacks as the Spain investigation focuses on possible links the homegrown cell may have established overseas. Most of its members are from Morocco or of Moroccan descent.

Moroccan authorities have arrested at least one man in connection to the probe, according to the private news agency Europa Press.

Es Satty himself spent three months in early 2016 in the Belgian city of Vilvoorde, which is known for Daesh recruiting and radical activity. The mayor of Vilvoorde, Hans Bonte, said the police there contacted Catalan authorities at the time and were told Es Satty had no links to extremist violence.

Belgium's federal prosecutor's office said Wednesday it had opened a case file to establish whether and under what circumstances Es Satty stayed in the country.

Investigators were also looking into material found during searches in two towns in northeast Spain, a regional police spokeswoman said.

She declined to say what they found in raids late Tuesday at a cybercafe in Ripoll, an ancient Catalan town where most of the attack suspects were from, and a house in Vilafranca del Penedes.

Vilafranca is 15 kilometers (9 miles) from where the suspected driver in the Barcelona attack, Younes Abouyaaqoub, 22, was shot dead by police Monday.

Abouyaaqoub, who fatally stabbed another person while fleeing Thursday, is known to have changed clothes, picked up a bag of knives and a fake explosive belt in the time between the Barcelona attack and his death.

The court interrogations Tuesday exposed more details about how events unfolded in the hours before and after the Las Ramblas boulevard carnage on Aug. 17.

That afternoon, another member of the cell abandoned another rented van that was involved in an accident in a highway near Cambrils.

According to the police investigation, he regrouped with four other members who had bought four knives and an ax in the resort town three hours before they all were killed by police.

Half-burned receipts for the knives were discovered in a nearby farmhouse that could have been used as a safe house.

Three of the four surviving suspects deny being part of the cell responsible for attacks.