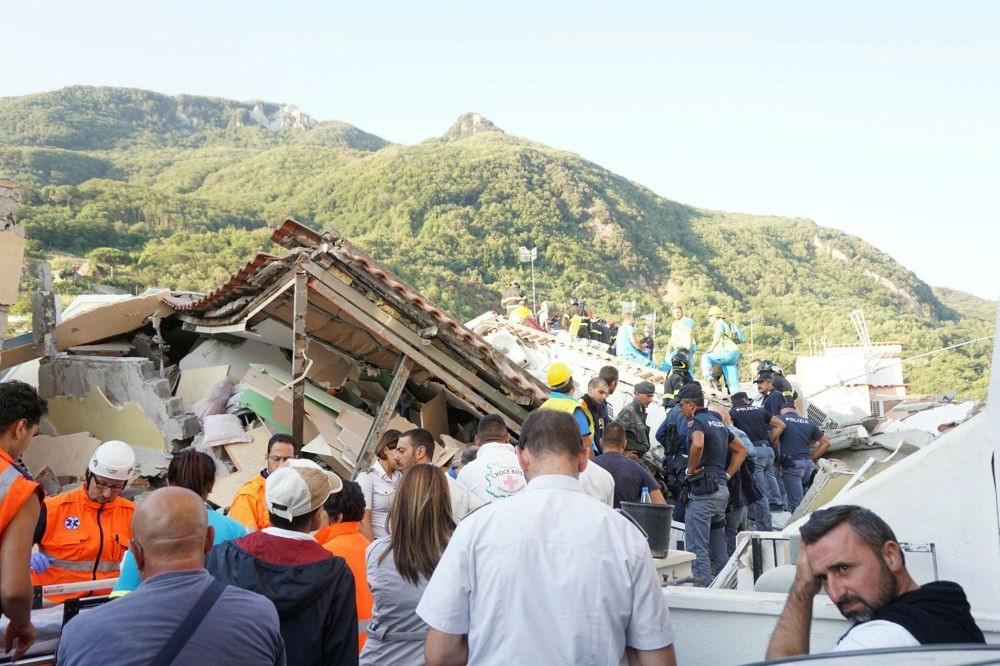 Rescuers at work amongst rubble and damaged houses the day after the earthquake in Ischia, Italy, Aug. 22.
by German Press Agency - DPA
Aug 23, 2017 12:00 am

An earthquake on one of Italy's most scenic islands left two people dead, while three children trapped for hours under rubble benefited from a "miracle" rescue.

Italy's geological institute INGV said the 4.0-magnitude quake in Ischia, about 55 kilometers off the coast of Naples, struck shortly before 9 pm (1900 GMT) Monday and had its epicenter at a depth of 5 kilometers. The island's population of 64,000 swells to at least double in the summer.

Seven-month old Pasquale was pulled from the rubble about seven hours after the quake. The national fire department, or Vigili del Fuoco, spoke of a "miracle" as it published videos and pictures of the scene. His brother Mattias, 7, was rescued at around 10:30 am Tuesday, while the eldest sibling Ciro, 11, was brought to safety after almost three hours.

A police officer, Andrea Gentile, told the ANSA news agency that Ciro saved Mattias by pushing him under a bed, and alerted rescuers to their presence by stirring rubble around him with a broomstick.

According to authorities, a woman was killed by debris that fell from a church, and another one trapped in the house where the children lived with their family, in the municipality of Casamicciola, is presumed dead.

"Italy is united in the grief for the victims and in solidarity. We are all standing next to those committed to rescue efforts," Prime Minister Paolo Gentiloni wrote on Twitter.

A local doctor told ANSA that 39 people were injured, including one who was in a serious condition and was airlifted to Naples. Fifteen more were still hospitalized on the island yesterday. The quake "was really strong, and really scary," Donatella Migliaccio, a local councillor, told dpa. Some 2,600 people need assistance, Italy's Civil Protection agency said.

Overnight, people were accommodated on a football pitch, amid a temporary blackout and scenes of panic. Streets were clogged, with tourists' cars queuing to board ferries taking them home.

"There is a paranoia effect that I have trouble understanding, but it is there, God knows how many people have left the island since this morning," Migliaccio told dpa.

The INGV initially classified the earthquake as less serious, with a magnitude of 3.6 with a 10-kilometre-deep epicenter, raising questions about how a relatively weak seismic event could wreak so much havoc.

Local mayors insisted that unlicensed construction on the island was not directly to blame for the damage, and most of the collapsed buildings were ancient structures in a limited area of the Casamicciola district.

Ischia, an island whose volcanic origin makes it more vulnerable to earthquakes, has earned international fame for its thermal baths since the 19th century. In 1883, the island was struck by a 5.8-magnitude earthquake that killed more than 2,300 people, mostly in Casamicciola. The latest disaster took place hours after Italian Prime Minister Paolo Gentiloni promised reconstruction efforts following last year's earthquakes in central Italy, in which more than 300 people perished.