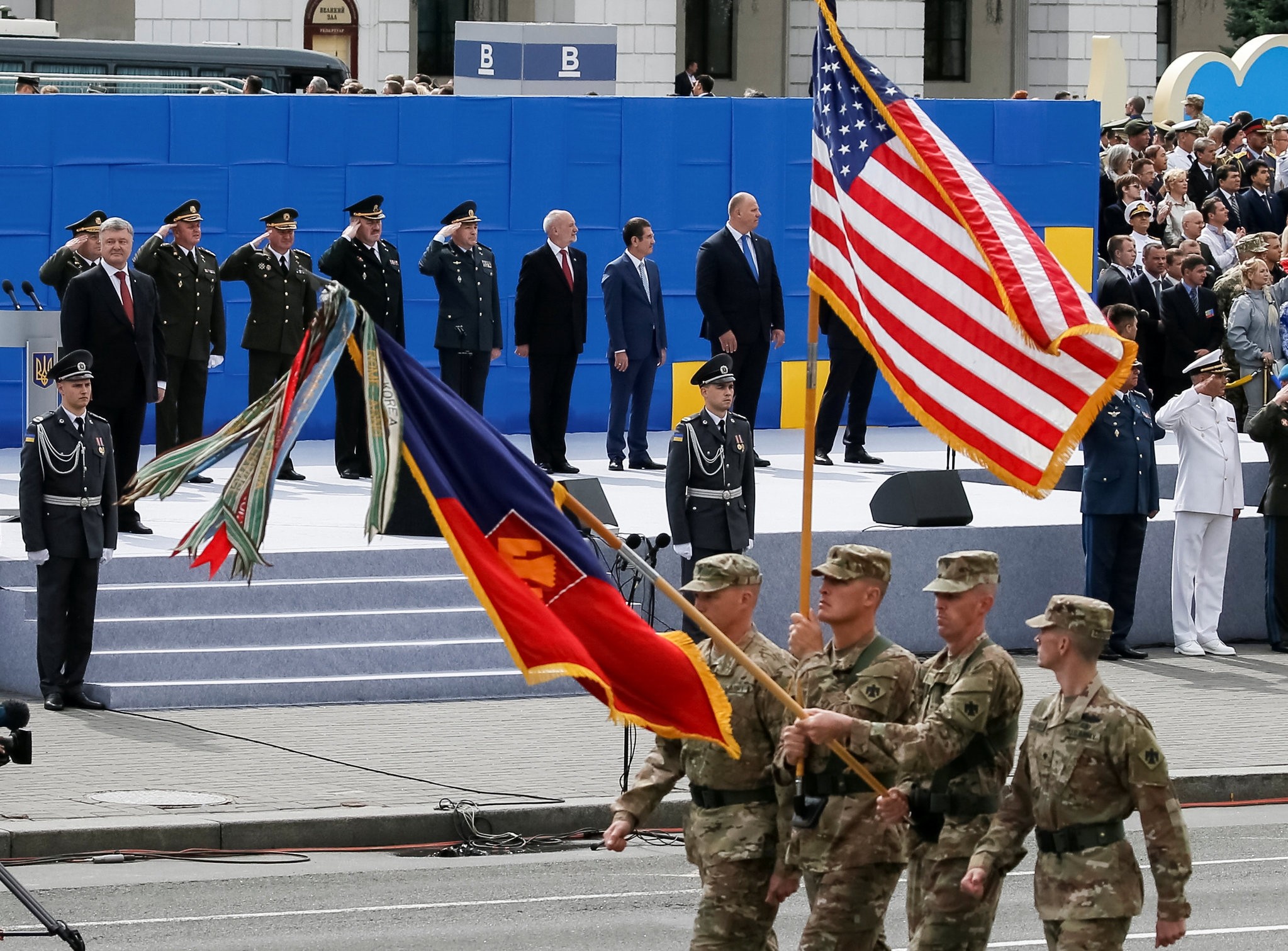 On the 26th anniversary of Ukraine's independence from Moscow, U.S. Defense Secretary Jim Mattis sharply criticized Russia as an international menace and said the Trump administration will not accept Moscow's annexation of Ukraine's Crimean peninsula.

After attending a raucous and colorful independence day parade, Mattis met with Ukrainian President Petro Poroshenko and other top government leaders. He is the first Pentagon chief to visit the former Soviet republic since Robert Gates in 2007.

"Have no doubt," Mattis said at a news conference with Poroshenko, "The United States stands with Ukraine."

He said Washington does not, "and we will not," accept Russia's annexation of Crimea, a 2014 action that was followed by Russian military intervention in support of separatists in eastern Ukraine.

"Despite Russia's denials, we know they are seeking to redraw international borders by force," Mattis said, an ambition by Moscow that Mattis said is undermining sovereign European nations and stirring tension.

U.S. secretary of defense also said that sanctions against Moscow will remain in place until it stops supporting rebels and returns Crimea

Meanwhile, Poroshenko denounced Russia as an occupier and compared it to Nazi dictator Adolf Hitler.

Referencing a battle three years ago in Ukraine's eastern region of Donetsk, which borders Russia, Poroshenko said in a speech that the Russian military directly attacked Ukrainian forces.

"With particular pain we remember the heroes of Ilovaisk. They were insidiously attacked by regular units of the Russian army that invaded our land without declaring war, as Hitler once did," Poroshenko said, according to a transcript on his website.

Russia annexed Ukraine's southern Crimea region – the site of a Russian naval base – in retaliation for Ukraine ousting its pro-Russian president at the time.

Russia, which had condemned the ouster as a Western-orchestrated coup, has supported rebel groups in Ukraine's two eastern-most regions for the past three years. However, Russia has adamantly denied Ukraine's allegations that it has fuelled the conflict with provisions of troops and weapons.

Poroshenko blamed the Kremlin for the deaths of the more than 10,000 people killed in the conflict. "Do not ever forget nor forgive," he said in his address to the Ukrainian people.

He extolled Ukraine's strengthening ties with the West, expressing hope that his country would someday join the European Union and the Western military alliance NATO.

Mattis also ticked off a series of international agreements and commitments that Moscow has made since the collapse of the Soviet Union in 1991, including a two-year-old accord known as the Minsk Agreement, which lays out a roadmap for reducing the conflict in Ukraine that has claimed some 10,000 lives over the past three years. He also cited other Russian commitments to Ukraine dating to 1994.

"Unfortunately, Russia is not adhering to the letter, much less the spirit of these international commitments," he said.

In his remarks alongside Poroshenko, Mattis said the U.S. is committed to helping Ukraine build and modernize its armed forces, and would continue to put pressure on Russia over what he called its aggressive behavior, but he made no mention of providing lethal arms.

Mattis is the first Pentagon chief to visit Ukraine in a decade.