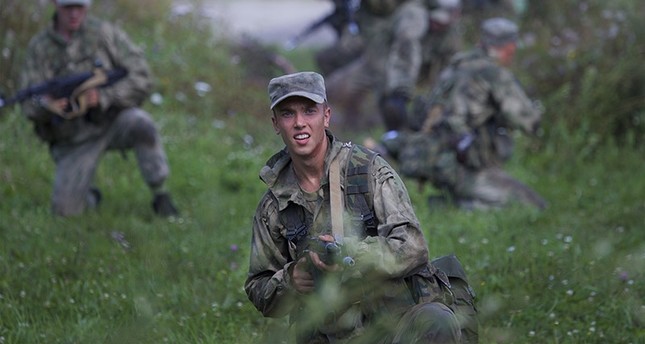 In this file photo taken on Wednesday, Aug. 2, 2017 Russian soldiers compete during a team's run at the Army Scout Masters competition, part of Army Games, outside Novosibirsk, 2900 km (some 1800 miles) east of Moscow, Russia. (AP Photo)

Russia and Belarus say the Zapad 2017 exercise, which runs from Sept. 14 to Sept. 20 not far from the borders of NATO allies Estonia, Latvia, Lithuania and Poland, will involve less than 13,000 troops. Under international rules, the two should allow wider access to monitors if troop numbers exceed that figure.

NATO spokeswoman Oana Lungescu said the three experts will attend "Visitors' Days" in Belarus and Russia after they were invited to attend.

But she said international rules permit monitors to have much wider access, including briefings on the exercise, opportunities to talk to soldiers and overflights.

The rules governing military exercises are enshrined in the Organization for Security and Cooperation in Europe's so-called Vienna Document.

Stoltenberg is calling for the Vienna Document to be revamped, and believes he can muster enough support to ensure that unannounced war games, or snap exercises, can be watched with "snap monitoring," or that small, multiple maneuvers under different commands be recognized as one big exercise, loopholes he says Moscow is exploiting.

"It's especially important now, because tensions are higher than they used to be. There is more military activity, more exercises and therefore it's even more important that we avoid incidents and accidents or misunderstandings," he told The Associated Press on Friday, in Orzysz, Poland.

Stoltenberg was in Orzysz to thank those in the 1,200 U.S.-led battlegroup, based near Russia's Kaliningrad region and Belarus, for their service. NATO has a total of around 4,500 troops based in Estonia, Latvia, Lithuania and Poland in response to Russia's renewed assertiveness.

NATO allies are concerned that Moscow might leave military equipment behind in Belarus when the exercises are over, perhaps to use later should President Vladimir Putin want to send troops quickly across the border, as he did in Georgia in 2008 and Ukraine in 2014.

"The most improbable scenarios have been floated," he said Tuesday. "Some have reached as far as to claim that the Zapad 2017 exercises will serve as a 'platform for invasion' and 'occupation' of Lithuania, Poland and Ukraine."

Fomin said the Russian armed forces were inviting foreign observers to the maneuvers, which will involve 5,500 Russian and 7,200 Belarusian troops, about 70 aircraft, up to 250 tanks, 200 artillery systems and 10 navy ships.

But Lungescu said the invitations are no substitute for real observation under the Vienna Document.

"Russia and Belarus are instead choosing a selective approach that falls short. Such avoidance of mandatory transparency only raises questions about the nature and purpose of the exercise," she said.

In eastern Poland, U.S. 2nd Cavalry Regiment Lieutenant Colonel Christopher L'Heureux, says NATO troops remain in a state of readiness, but will not over-react to developments across the border.

"If something goes sideways, we'll be ready to address that, but we're not going to do anything special," he told AP.

Share on Facebook Share on Twitter
Previous in Europe A Turkish Airlines pilot prevented the deportation of a young Afghan... Next in Europe Some 70,000 people in Frankfurt will have to leave their homes this...
DAILY SABAH RECOMMENDS