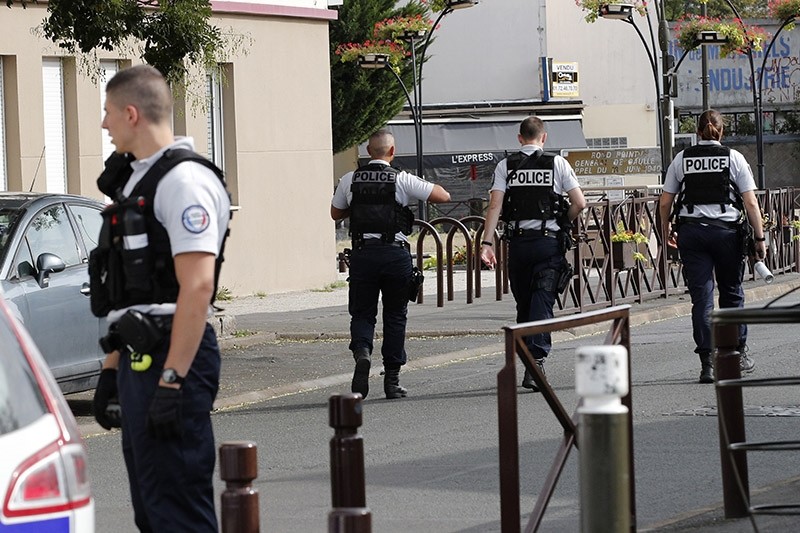 French police officers walk as two people have been detained after a possible explosives laboratory was discovered in Villejuif, south of Paris, Wednesday, Sept. 6, 2017 in Paris. (AP Photo)
by Sep 07, 2017 12:00 am

French police investigating a suspected bomb factory near Paris believe three men arrested in connection with it were preparing attacks and had made calls to Syria, a minister said Thursday.

Ingredients to make an explosive known as TATP, commonly used by the Daesh terror group, were discovered in the apartment in the Parisian suburb of Villejuif on Wednesday, as well as gas canisters and electrical wiring.

Anti-terror police launched raids following a tip-off from someone who works in the building who has been praised for his "citizen's reflex" for reporting suspicious activity.

Speaking Thursday on Franceinfo radio, Interior Minister Gerard Collomb said the men in custody -- two were arrested on Wednesday and a third overnight -- "were involved in terrorism."

"We've seen that there were calls exchanged" with someone in the war-zone in Syria, Collomb added.

The men have denied they were preparing attacks, claiming they were planning a string of robberies in which the explosives would be used to blow up bank cash machines, Collomb said.

The arrests raised questions about whether the suspects might be linked to a terrorist cell in Spain which carried out two vehicle attacks in Barcelona and Cambrils last month.

Some of the terrorists behind the violence in Spain -- mostly Moroccan nationals who were also preparing bombs made with TATP -- visited Paris on August 11 and 12 about a week before their deadly rampage.

Collomb said "it was possible there were links but honestly I don't know."

The Spain attackers stayed in a hotel in the Parisian suburb of Malakoff a short drive from where the suspected bomb factory was discovered on Wednesday in Villejuif.

After buying a camera and leaving their hotel, Collomb said the Spain terrorists "spent a long time in front of the Eiffel Tower... We have it all from their phone data."

France has been under a state of emergency since Daesh gunmen launched a series of simultaneous raids on bars, the national stadium and the Bataclan concert hall in Paris in November 2015, leaving 130 people dead.

Since those atrocities and a truck attack in Nice in July 2016 that killed 86, France has suffered a string of smaller assaults mainly targeting security forces.