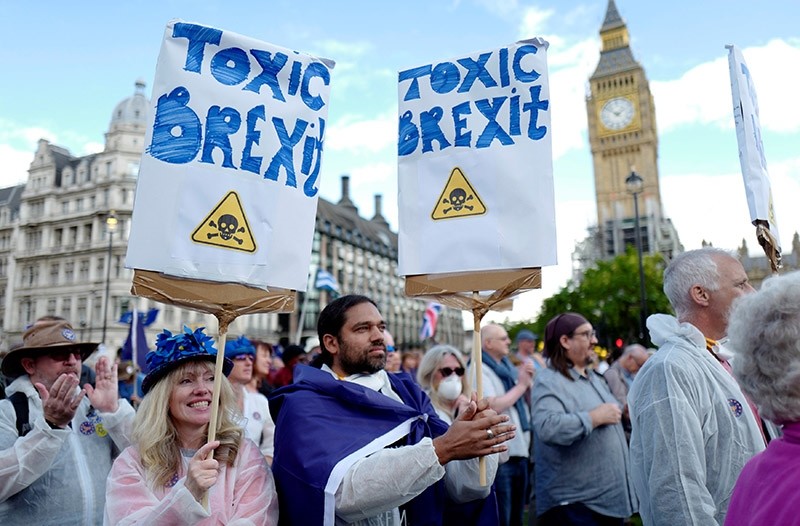 Demonstrators react in Parliament Square during the anti-Brexit 'People's March for Europe', in central London, Britain September 9, 2017. (Reuters Photo)
by Compiled from Wire Services Sep 09, 2017 12:00 am

Tens of thousands of people took to the streets in London on Saturday protesting the United Kingdom's impending withdrawal from the European Union.

The demonstration, which was supported by singer-songwriter and political activist Bob Geldof, made its way through the city center toward the British parliament, before converging at Parliament Square.

Demonstrators gathered outside the parliament building, dressed in the EU's blue and yellow colors, while waving EU flags.

"Help! We're trapped on a small island that's been taken over by mad people!" read one sign held aloft above a sea of blue EU flags.

"Take back control from these clowns," demanded a banner featuring photos of senior ministers, while another referenced the divorce negotiations, saying: "This best deal is the deal we've got!"

Other marchers held up large placards bearing the slogan "Exit from Brexit."

Protest organizers estimated some 50,000 people had marched through central London.

The demonstration comes at an awkward moment for the government, with the lower house of parliament set to vote on the European Union Withdrawal Bill for the first time on Monday.

Based on this legislation, the government will, at its discretion, transform more than 12,000 EU regulations into national laws.

For its part, the opposition has accused the government of interfering with the traditional separation of powers.

The future of Prime Minister Theresa May is also a major factor in the vote, and may arguably be at stake, with her leadership under increasing pressure since an unexpectedly poor showing in June's general election.

Britain voted in June 2016 to withdraw from the 28-nation EU bloc. The talks between the EU and UK have been stalled because of disputes over how much Britain will have to pay the EU because of existing obligations.