Thousands of Catalans rally for independence from Spain 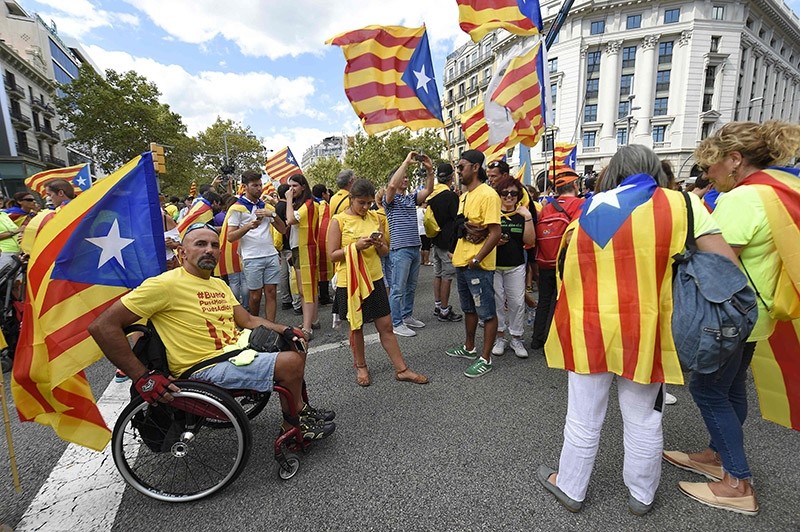 People wave 'Esteladas' (pro-independence Catalan flags) as they gather before a pro-independence demonstration, on September 11, 2017 in Barcelona during the National Day of Catalonia, the ,Diada., (AFP Photo)
by Compiled from Wire Services Sep 11, 2017 12:00 am

Hundreds of thousands of people are expected to rally in Barcelona Monday to show support for an independent Catalan nation and the right to vote in a contested referendum that has been banned by Spain.

The rally falls on National Catalonia Day - the "Diada," which is celebrated annually to mark the fall of Barcelona to the army of a pretender to the Spanish throne in 1714 following a months-long siege.

The anniversary traditionally mobilizes many Catalans but this year it comes amid deep social and political division over the Oct. 1 vote.

Those against independence complained that a day meant for all Catalans had been hijacked by the separatists -- and even more so this year ahead of the referendum planned for October 1.

"The theme of today's protest is 'Yes Diada'," Ines Arrimadas, the leader in Catalonia of the anti-independence Ciudadanos party, said on Spanish television.

"Yes" refers to the answer separatists will give in the referendum when asked whether they want their region to be independent.

"That means that those of use who aren't in favor of independence cannot participate," Arrimadas said.

Prime Minister Mariano Rajoy, whose conservative government is fiercely against the vote, wished Catalonia "a good day", calling "for a Diada of freedom, cohabitation and respect for all Catalans".

Organizers have chartered about 1,800 buses to take people to Barcelona for the march.

The demonstrators will take the shape of a giant "X" by gathering on the Paseo de Gracia and Aragon avenues in central Barcelona to represent the mark Catalans will make on their ballots during the referendum.

If the "Yes" side wins the vote, Catalonia's regional government has vowed to declare independence within 48 hours and set about building a sovereign state.

With Spain's central government promising to block the referendum, the pro-independence camp is keen to show that it can rally its troops -- especially after participation in the "Diada" declined last year.

Rajoy's conservative government argues the vote violates the constitution, which states that only central authorities can call a referendum.

Following a legal challenge from his government, Spain's Constitutional Court suspended a referendum law that was fast-tracked through Catalonia's regional parliament on Wednesday.

Police have searched a Catalan printing house and a local weekly newspaper suspected of making ballots for the referendum while Spain's state prosecutor has launched criminal proceedings against Puigdemont and other Catalan officials.

According to a June survey by CEO, the Catalan government's own polling agency, 41 percent supported independence while 49 percent were for staying in Spain. Some 70 percent wanted a referendum, however, to settle the question once and for all.

Like the referendum held in Britain last year on the country's membership in the European Union, the issue in Catalonia pits rural areas -- which are more pro-independence -- against large urban centers like Barcelona that are more in favor of remaining in Spain.

Catalonia, which is roughly the same size as Belgium and has its own language and customs, already has significant powers over matters such as education and healthcare.

But Spain's economic problems, coupled with a perception that the wealthy northeastern region's 7.5 million people pay more in taxes to Madrid than they get in return, have pushed the independence question to the center stage.

During the 2013 "Diada" demonstrators formed a human chain that crossed Catalonia.

The following year the demonstration took the shape of a giant "V" for "vote" down two of the main avenues of Barcelona. In 2015 the march resembled a human arrow.