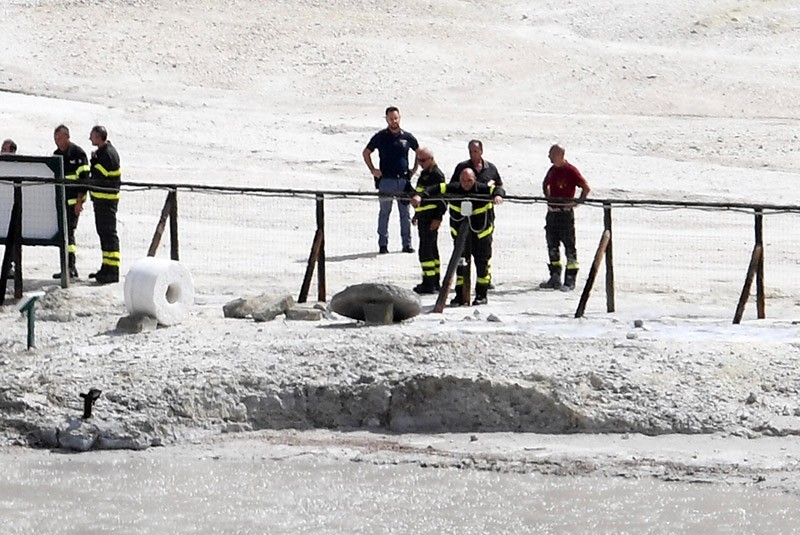 An Italian couple and their 11-year-old son were killed on Tuesday when a hole opened up in the ground at a bubbling volcanic crater near Naples, a popular tourist site.

Italy's fire brigade said it pulled three dead bodies from a shallow hole in a section of the crater at the Solfatara volcano, which was surrounded by a wooden fence meant to keep tourists out.

The victims were a 45-year-old man, a 42-year-old woman and their son. Another seven-year-old son did not fall into the hole and was unharmed, national fire brigade spokesman Luca Cari said.

"Either there was a small explosion, or the ground simply gave way from their weight, and they fell into this hole," Cari said. "It was inside a fenced-off area."

According to the ANSA news agency, the boy ran through a fenced-off area and was overwhelmed by toxic fumes. His parents died while trying to remove him.

The family was from Turin and was probably on a tour of the area, ANSA said.

Firemen on the scene said the three victims appeared to have died from asphyxia, possibly because of hot gases emanating from the ground. The official cause of death will be determined by an autopsy.

The Solfatara volcano is one of many volcanic craters in the Campi Flegrei area, 20 kilometers (12 miles) west of Naples, which first opened up to tourists in 1900, according to its website. The accident happened at the Bocca Grande (Big Mouth), the largest of the fumaroles in the area, which the ancient Romans called the home of the God of fire.

The ground at the site emits water vapors of 160 degrees Celsius (320 degrees Fahrenheit) and gases including poisonous hydrogen sulphide, the website said.