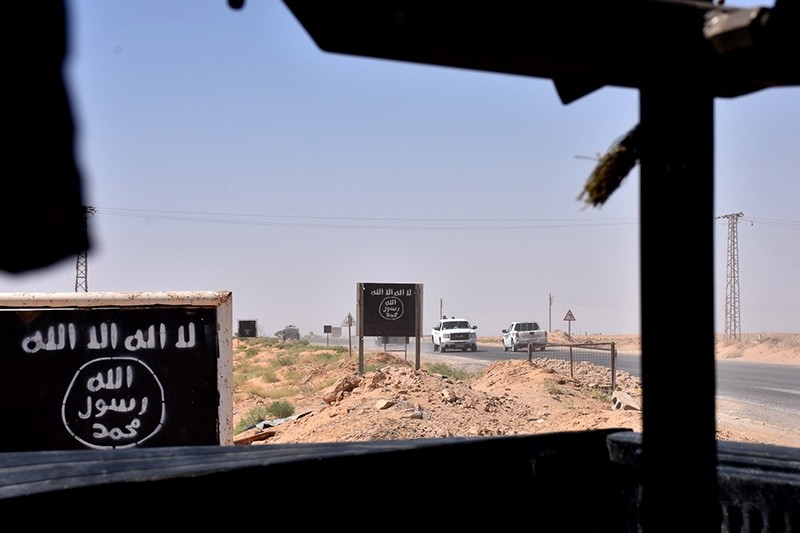 Billboards show the logo of the Daesh terrorist group near the village of al-Malihah, in the countryside of Deir el-Zor, where Assad regime forces are holding a position on Sept. 9, 2017, during the ongoing battle against the terrorists. (AFP Photo)
by Compiled from Wire Services Sep 12, 2017 12:00 am

Kerchove told German daily Welt in an interview published Tuesday that the extremist group used to have about 5,000 European fighters in Iraq and Syria.

According to De Kerchove, about 1,500 fighters have since returned home and 1,000 have been killed. He said many of those remaining are likely to die fighting or at the hands of Daesh if they desert, while some may move to other conflict areas such as Somalia or Yemen.

According to official U.S. estimates, Daesh has up to 13,000 fighters overall left in Syria and Iraq.

De Kerchove says the loss of territory will not end the terror threat posed by Daesh.

Meanwhile, an EU counter-terrorism report to be presented to European interior ministers Friday said cooperation with Turkey and other regional countries was "essential."

In the report, Kerchove is expected to recommend "strengthening the dialogue with Turkey on returnees" particularly on specific issues such as information exchange, expulsions of returning foreign fighters and on escorting such suspects home.

It also confirmed that Turkey and Europe are developing polices in an anti-Daesh working group which "should inform the EU's approach to working with Turkey on the returnees file."