Clashes erupt during protests over labor overhaul in Paris 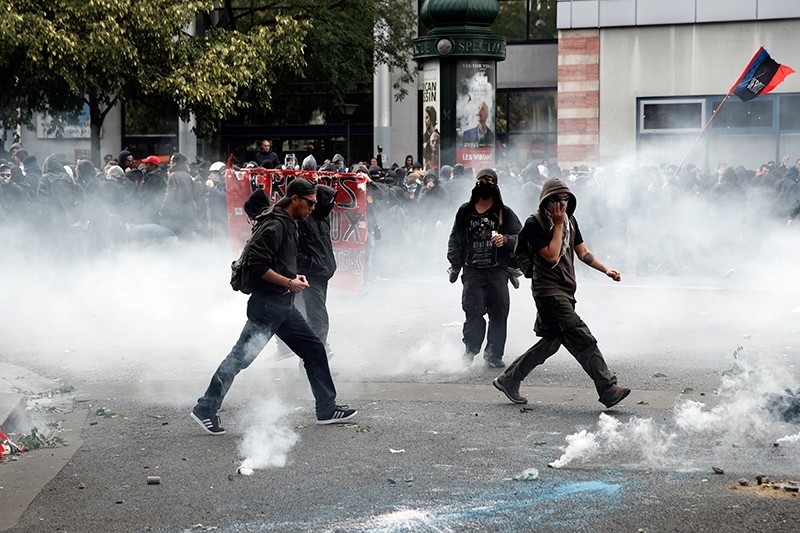 Violence erupted between protesters and security forces during a rally in Paris against proposed French labor law reforms Tuesday.

Images from the scene also show car and shop windows being broken by the protesters.

Soon after the clashes broke out security forces deployed a water cannon to the streets of Paris to disperse the crowd.

The protests are the first big public display of discontent with President Emmanuel Macron's presidency, which kicked off in May amid enthusiasm over his promises of revving up the French economy but is now foundering amid anger over the labor decrees and other domestic troubles.

The protests come amid anger at a comment last week by Macron suggesting that opponents of labor reform are "lazy." Government spokesman Christophe Castaner said on RTL radio Tuesday that Macron didn't mean workers themselves but politicians who failed to update French labor rules for a globalized age.

Philippe Martinez, the head of the CGT union leading yesterday's protests, said the reforms give "full powers to employers" and has called for strikes and rallies. Another day of demonstrations has been organized by the CGT on Sept. 21.

The 39-year-old centrist president, who swept to power in May on promises to reinvigorate the economy and transcend left-right politics, used executive orders to fast-track his labor reforms. They must be ratified by parliament in the coming months, but are expected to breeze through given the large majority won in June by Macron's Republic on the Move party.

The reforms will give small companies in particular more freedom to negotiate working conditions with their employees, rather than being bound by industry-wide collective agreements negotiated by trade unions. A cap has also been set on the amount of compensation awarded by industrial courts in cases of unfair dismissal - a key demand of bosses who complain that lengthy and costly court cases discourage them from hiring.

Other measures include streamlining workers' committees, which are mandatory within large companies, and expanding the use of flexible "project contracts" which allow companies to hire people for a specific job.

In a further concession to companies, multinationals whose French operations are struggling will find it easier to lay off staff, while workers made redundant will receive higher payouts. Several unions also fear new measures that would give employers greater leeway to launch voluntary redundancy plans.

"This is not a labor law, it is a law that gives full powers to employers," said the CGT's Martinez. Eric Beynel of the Solidaires union, which backs the protests, vowed that workers would keep up the pressure "until the orders are withdrawn." But other unions have signaled willingness to compromise, including the Force Ouvriere (FO) union, though some of its branches are planning to defy orders and down tools on Tuesday.

Macron is hoping to avoid a rerun of labor protests that rocked France for months last year under his socialist predecessor Francois Hollande, which repeatedly descended into violence. The president, whose personal ratings have slumped sharply since he came into office, was in the Caribbean yesterday visiting the French islands hit by hurricane Irma last week.