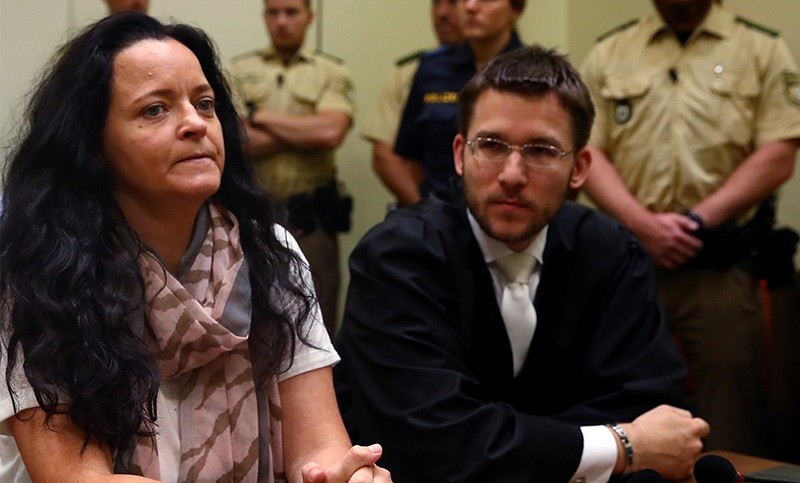 Defendant Beate Zschaepe, accused of helping to found a neo-Nazi cell called the National Socialist Underground (NSU), and her lawyer Mathias Grasel attend the continuation of her trial at a courtroom in Munich, Germany Sept. 1, 2017 (Reuters Photo)
by Daily Sabah with Wires Sep 12, 2017 12:00 am

Neo-Nazi terrorist group National Socialist Underground (NSU) member Beate Zschaepe, 42, faces life imprisonment for being an accessory to the murder of eight Turks, one Greek and a German police officer during a seven-year rampage between 2000 and 2007 that was largely ignored by authorities until the two other NSU members committed suicide. The prosecutor also demanded an additional period of detention.

According to the German news agency DPA, Federal Prosecutor Herbert Diemer told the Munich court that Zschaepe, who has been on trial for more than four years, should face a penalty for each of the killings. Diemer accused Zschaepe of being an "ice-cold calculating person," who had shown a disregard for human life.

The police had no idea an extremist group was murdering people, believing the Turks were being murdered due to personal reasons. The existence of the NSU was only found out when two of its members, Uwe Böhnhard and Uwe Mundlos, committed suicide after a bank robbery on Nov. 4, 2011 and Zschaepe surrendered to the police a few days later.

A trained gardener, Zschaepe has denied any involvement in the murders, laying the blame on the two other NSU members. She is also accused of torching the apartment where she lived with Mundlos and Bohnhardt in the eastern Germany city of Zwickau. In addition, she is charged with being involved in two bombings in the western German city of Cologne and 15 robberies across the nation committed by the NSU.

Zschaepe, along with Mundlos and Bohnhardt, who were in their 30s when they died, shared the same fanatical national socialist view of the world, which helped to fuel terror among immigrants through a campaign of murders, the federal prosecutor said. In doing so, the accused had represented "a third of a triumvirate of conspiracy," prosecutors said in setting out their case against Zschaepe.

Blunders on the part of authorities investigating the NSU or "coincidences" that led up to the destruction of critical evidence has been piling up in the case since the gang's existence was made public. Critics of the case also claim police and intelligence services that had hired people from the neo-Nazi scene to serve as informants have tried to erase their connections to the NSU case.

One of the most criticized acts by the families of the victims was the way they were treated when the murders took place. The discovery of the NSU shed light on how police, either deliberately or mistakenly, blamed disputes within the Turkish community for the murders. The families seek compensation for damages incurred from being "wrongfully suspected" by police in the murders of the victims.

Four other suspects are also on trial in Munich, accused of providing support to the far-right group. This included a former functionary of the extreme-right National Democratic Party, Ralf Wohlleben, for whom Diemer demanded a 12 year sentence for his role in assisting with the nine murders linked to the NSU. The 42-year-old Wohlleben was accused of procuring the Ceska pistol that the NSU members used in committing the murders. The prosecutor called for a youth sentence of three years for another of the accused, Carsten S, who had procured the weapon together with Wohlleben but who had admitted his guilt.

After the prosecutor's statement, which concluded Monday, the defense will argue their case. The court decision is expected by the end of the year.