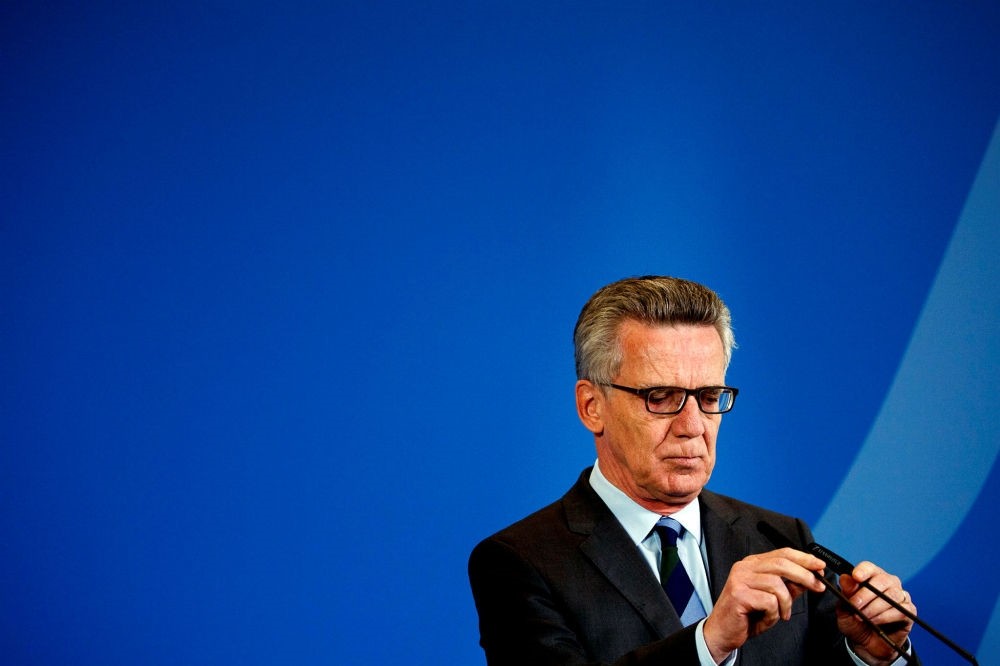 German Interior Minister Thomas de Maiziere speaks during a press conference in Berlin about the deportation measures to Afghanistan, Sept. 13.
by Compiled from Wire Services Sep 14, 2017 12:00 am

Germany has restarted sending failed Afghan asylum seekers back to their home, leaving them to face an uncertain future in a war-torn country

Eight Afghans expelled from Germany arrived in Kabul on Wednesday as Berlin resumed deportations of rejected asylum seekers from the war-torn country months after suspending the process when a huge truck bomb hit the Afghan capital.

Germany put the controversial expulsions on hold after a sewage tanker packed with explosives detonated near the German embassy in Kabul's diplomatic quarter on May 31, killing around 150 people and wounding hundreds more.

The latest group represented the sixth wave of repatriations of Afghans from Germany since December under a disputed Afghan-European Union deal aimed at curbing the influx of migrants.

In Berlin, Interior Minister Thomas de Maiziere defended the latest deportation, saying that "all eight persons have been convicted of serious crimes", without specifying the offences. De Maiziere said that Germany would stick with its policy of returning to Afghanistan convicted criminals, people feared by police to be planning an attack, and those who refuse to cooperate with authorities or give their names.

After arriving at Kabul airport on a charter flight, the eight deportees were escorted by police to a car park where an official registered their names. Some of the men carried small backpacks while others had no luggage at all.

Afghan asylum-seekers have been suffering from deportations to their home country in Germany. Germany has increasingly sending back Afghans, arguing that much of their country, where the German military has helped stabilization efforts for years, is safe. The German government decision, which led to some controversy, placed parts of Afghanistan on the list of safe countries of origin, allowing the deportation of thousands of Afghan asylum seekers.

North Rhine Westphalia's integration minister, Anne Spiegel, of the opposition Green party, criticized the fact that the situation for the deportees was not safe in large parts of their home country.

"What plagues me with great concern is the high number of victims in the civilian population," Spiegel said on Tuesday in the city of Mainz.

The most recent report from Germany's foreign and interior ministries on the situation in Afghanistan had too little about the security situation for the civilian population, Spiegel complained.

The men face an uncertain future in a country struggling with high unemployment, a weak economy and masses of refugees being ejected from Pakistan and Iran, as well as hundreds of thousands of others uprooted by war.

A hundred Afghans have now returned to the country after their asylum applications were rejected by the German government, according to official data.

Chancellor Angela Merkel has been battling to bring down the numbers of asylum seekers after the arrival of more than one million migrants -- mainly from Iraq, Syria and Afghanistan -- hoping to find refuge in 2015 and 2016. While Germany granted safe haven to most people from war-torn Syria, Berlin has argued that it can safely repatriate people to Kabul and other parts of Afghanistan, even as Taliban and Daesh militants terrorize much of the country.