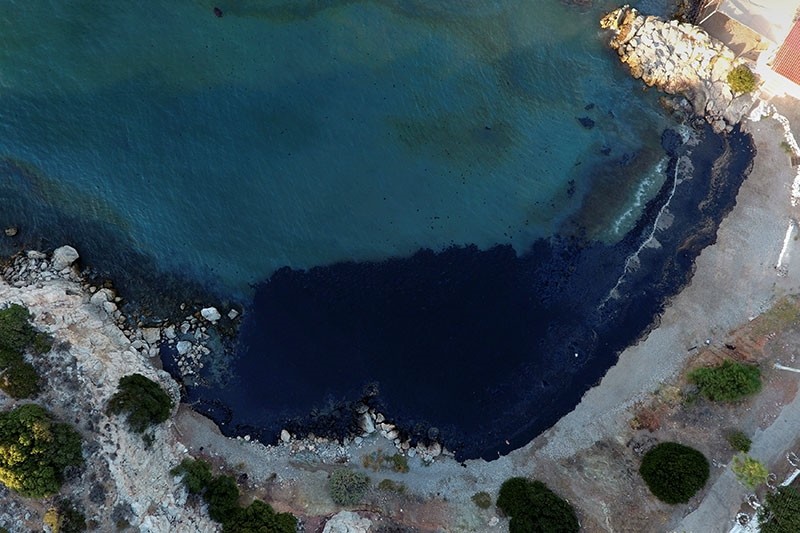 Greek authorities insist they are doing everything they can to clean up pollution following the sinking of a small oil tanker that has left large sections of the Greek capital's coastal areas coated in viscous, foul-smelling oil.

The small Agia Zoni II tanker sank Sunday while anchored off the coast of Salamina island, just off Greece's main port of Piraeus. It was carrying 2,200 tons of fuel oil and 370 tons of marine gas oil.

Small slicks were reported at beaches in the suburbs of Glyfada and Piraeus Wednesday. Glyfada Mayor Giorgos Papanikolaou says municipal workers have set up floating booms offshore and used chemicals to try to dissolve the oil.

Authorities have appealed to swimmers to stay away from some popular beaches.

Whereas in Salamina, a 1.5 kilometer section of the island's beaches were darkened with oil. Mayor Isidora Papathanassiou told Greek media outlets that eastern coast of the island was covered in oil, and they are facing a major environmental catastrophe.

Merchant Marine Minister Panagiotis Kouroumplis says divers have sealed the 45-year-old ship's cargo holds and work is due to start on pumping out the remaining fuel.

Kouroumplis said Thursday that "all the means available in the country" are being deployed to tackle the spill, while the European Commission said Greece has requested help from the European Union's Civil Protection Mechanism and a specialized cleanup vessel has been deployed.

It was not immediately clear what caused the sinking. Weather conditions in the area were mild at the time and the vessel was anchored.

"If the wind direction changes, the problem could spread to the rest of the Saronic gulf," she said.

Local officials said fishermen had been told to avoid the area. Coastal businesses in the area have also shut down, the mayor said.

The tanker's captain and chief engineer were charged with negligence and released pending trial.

Salamis lies just off the Eleusis shipyards and oil refineries in Piraeus, one of the most polluted areas in Greece.

The sewage treatment plant of Psyttalia is also near the location where the tanker sank.