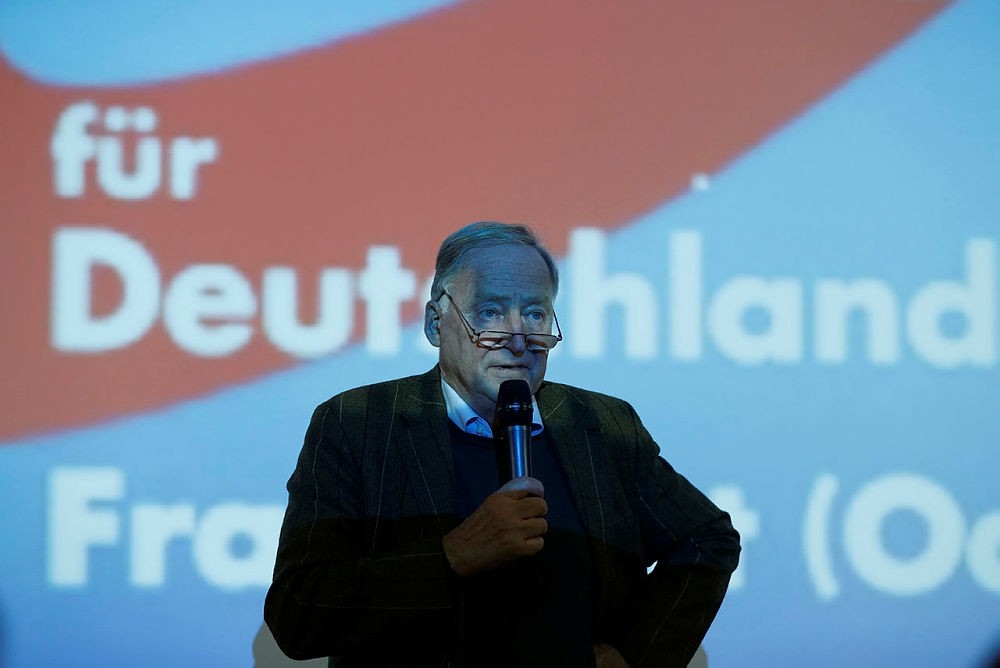 Top candidate of AfD (Alternative fuer Deutschland) party for upcoming general elections Alexander Gauland, gives a speech in Frankfurt, Germany, on September 11, 2017. (AFP Photo)
by Sep 15, 2017 12:00 am
The right-wing populist Alternative for Germany's (AfD) top candidate in this month's national election has provoked outrage by calling on the nation to stop atoning for its Nazi past and be proud of German soldiers who fought in two world wars.

"Yes, we have dealt with the crimes of the 12 years [of Nazi rule]," Alexander Gauland said in a provocative video posted on AfD's YouTube channel late Thursday.

"And, friends, when I look around in Europe, no other nation has so clearly come to terms with the wrongs of its past as Germany," said 76-year-old Gauland, who, along with Alice Weidel, heads AfD's campaign for the September 24 election.

"We do not have to confront these 12 years now. They no longer relate to our identity. And that's what we're saying," he said in the video of a speech he made on September 2 at a meeting of the AfD's radical-right faction, known as The Wing, in the eastern German town of Kyffhaeuser.

However, German Justice Minister Heiko Maas hit back on Friday at Gauland over his remarks.

The AfD apparently wants to become a "new political home for neo-Nazis," said Maas, who is a member of the centre-left Social Democrats.

"Anyone saying we should be proud of the crimes committed by German soldiers in the Second World War stands to be accused of being a right-wing extremist."

Germany's mainstream political leaders have been attempting to portray the AfD as an extreme right-wing party throughout the election campaign in a bid to scare off more moderate conservative voters from backing the anti-foreigner party.

"This party is not a normal democratic party when its top leadership has a right-wing ideology," said Green Party chief Cem Ozdemir.

The AfD's The Wing was set up in 2015 by Bjoern Hoecke and Andre Poggenburg, who head up the party in the eastern German states of Thuringia and Saxony-Anhalt, following an attempt by the leadership at the time to isolate the party's more extremist members.

In comments that have already incensed many online, Gauland told his audience in Kyffhaeuser that Germany should rehabilitate the image of its soldiers who fought in the First and Second World Wars.

"If the French are rightly proud of their emperor and the British of Nelson and Churchill, we have the right to be proud of the achievements of German soldiers in two world wars," the AfD chief said.

Germany's wartime army, the Wehrmacht is known for committing atrocities in the name of Hitler, including involvement in the mass murder of Jews, Communists and others deemed by the Nazis to be "undesirable."

Gauland's remarks chime with comments made by Hoecke, who also provoked anger in January when he called for a "180-degree turn" in the way Germany deals with the Second World War and condemned the Memorial to the Murdered Jews of Europe in Berlin as a "monument of shame."

Founded more than four years ago as a eurosceptic party, the AfD has since lurched to the right, adopting a staunchly anti-Islam and anti-foreigner party platform.

The AfD has enjoyed a surge of support in the wake of Chancellor Angela Merkel's controversial decision two years ago to open the nation's borders to refugees stranded in Hungary.

Polls published in the run-up to the election show the AfD garnering between 9 and 12 per cent of the vote, raising concerns that it could emerge as the nation's third political force after the election behind Merkel's conservatives and the centre-left Social Democrats.

This is not the first time that Gauland's comments have stirred a political controversy.

Last month he lashed out at Germany's Integration Commissioner for Migration, Refugees and Integration, Aydan Ozoguz, who has a Turkish background, saying that she should be "disposed of" in Turkey.

In the meantime, Weidel was this week forced to deny a German media report that she illegally employed a Syrian refugee as a housekeeper at her home in Switzerland.

Weidel's lawyer said his client had "a friendly contact" with a Syrian woman, who had also been a guest in her house.