Over one third of German voters still undecided before upcoming election 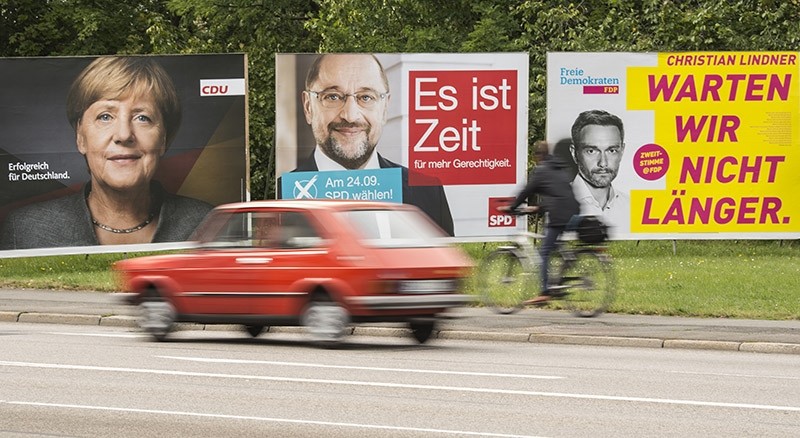 Support for Chancellor Angela Merkel's conservatives has slipped and over a third of Germans are still unsure how they will vote, an opinion poll showed on Friday, fuelling uncertainty about what kind of coalition will emerge from an election on Sept. 24.

The weekly survey, conducted by pollster Forschungsgruppe Wahlen for ZDF television, showed support for Merkel's conservative bloc falling 2 points to 36 percent -- a result that would still make it the largest group in parliament.

Support for its nearest rivals, the left-leaning Social Democrats (SPD), rose by 1 point to 23 percent. The business-friendly Free Democrats (FDP) and the anti-immigration, euro-hostile Alternative for Germany (AfD) were both on 10 percent.

The poll of 1,383 voters, conducted from Sept. 12 to Sept. 14, also showed that 39 percent of those surveyed were still unsure how they would vote.

"More than ever, all these polls should be taken with a grain of salt now. There surely could be some surprises on election night," said Gero Neugebauer, political scientist at Berlin's Free University.

He doubted the SPD could overtake Merkel's conservatives, who he expected to be the largest parliamentary party with the Social Democrats the second biggest.

"But in the fight among the smaller parties for third place and possible power in a coalition, everything is still up in the air," Neugebauer added.

With the election likely to install six parties in parliament, up from four now, Germany will be marked by a more fractured political landscape after the vote. This could make coalition-building difficult.

Friday's poll showed support for the far-left Linke stood at 9 percent, with the enviromentalist Greens on 8 percent.

Foreign Minister Sigmar Gabriel, a senior Social Democrat, told broadcaster SWR he favored a so-called "traffic light" coalition with the FDP and Greens. However, the poll put support for such an alliance at just 41 percent.

The survey showed there would be sufficient support for both a repeat of the incumbent "grand coalition" of Merkel's conservatives and the SPD, and for a so-called "Jamaica" coalition of the conservatives, FDP and Greens.

"I don't see how we should get together with the FDP," he told the daily Berliner Zeitung.

FDP leader Christian Lindner also played down the likelihood of such an alliance.

"The Greens have long since bid farewell to Jamaica by raising their demands to the max," he told Der Spiegel magazine.

Lindner, a potential finance minister if the FDP joins a ruling coalition, also set out red lines on euro zone policy ahead of potential coalition negotiations.

"I fear that Chancellor Merkel and French President Macron are agreed on new pots of money in the euro zone to create a gigantic financial transfer system," he said, before taking aim at European Commission President Jean-Claude Juncker.

"Mr Juncker wants to expand the euro zone, though its consolidation should be the priority now. Neither would be on with us," Lindner added, with reference to a transfer system and euro zone expansion.

Neugebauer said the FDP was fishing in the AfD's waters.

"FDP leader Lindner has turned a former pro-European party into some kind of AfD-light," he added.

The poll's margin of error was some 3 percentage points. With support for Merkel's conservatives and the FDP -- natural allies who have ruled together in the past -- at 46 percent, the margin of error suggests they could yet squeak into power.

A separate poll released on Thursday showed support for the SPD had slumped to its lowest level this year - at 20 percent - with Merkel's conservatives steady at 37 percent.

"There is high volatility not only because of those who are still undecided," said Neugebauer. "There are also many swing voters who change tack at the last minute for tactical reasons to ensure or prevent a certain coalition option."