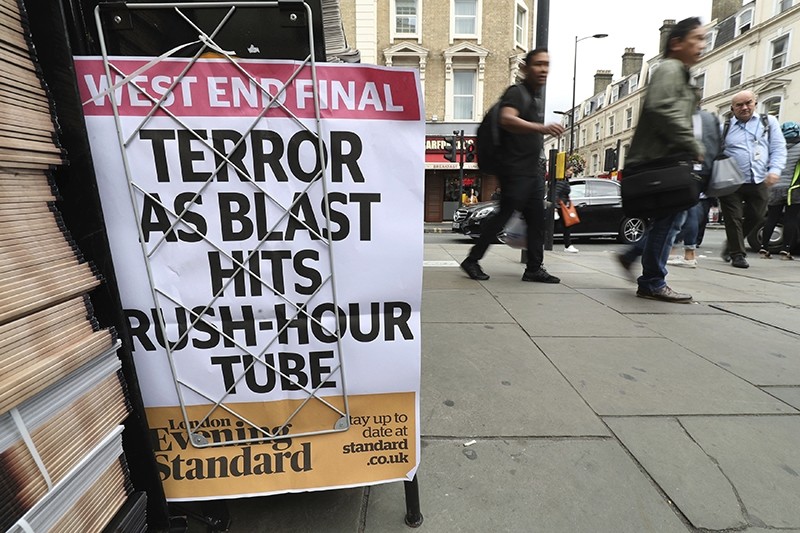 A London evening newspaper stand displays their headline outside Paddington tube station in London, after a terrorist incident was declared at Parsons Green subway station Friday, Sept. 15, 2017. (AP Photo)
by Compiled from Wire Services Sep 15, 2017 12:00 am

British Prime Minister Theresa May rebuked U.S. President Donald Trump over his tweets about the London train terror attack on Friday and said the bomb was designed to cause "significant damage".

Asked about Trumps' tweet saying that those responsible for the bomb in west London which injured 22 people were "in the sights of Scotland Yard, May said: "I never think it's helpful for anybody to speculate on what is an ongoing investigation."

Scotland Yard said it would not comment Trump's suggestion that police could have prevented the attack.

Earlier in the day, Trump wrote on Twitter: "Another attack in London by a loser terrorist. These are sick and demented people who were in the sights of Scotland Yard. Must be proactive!"

He added that his travel ban targeting six mostly Muslim nations should be "far larger, tougher and more specific - but stupidly, that would not be politically correct!"

May also said that the police and security services were doing all they could to identify those responsible for the "cowardly attack".

There will be an increased police presence on London underground trains, she said, but Britain's terrorist threat level will remain at "severe" - meaning an attack is highly likely.

Meanwhile, Sky News reported that British security services identified a suspect involved in the bombing of the busy commuter train in west London with the help of surveillance footage.

Witnesses described seeing a "wall of fire" as the bomb — hidden in a plastic bucket inside a supermarket freezer bag — went off about 8:20 a.m. while the train was at the Parsons Green station in southwest London.

The site of the blast is in a leafy, affluent part of the city, not near any of London's top tourist sites. British media reported that the bomb included a timer. It's not clear whether the device was intended to explode when it did.

Police were alerted when commuters reported a noise and a flash aboard the District Line train.

During rush hour, the subway train could hold more than 800 people. Aerial footage later showed commuters from other subway trains being evacuated along the elevated track.

The London Underground has been targeted several times in the past, notably in July 2005, when suicide bombers blew themselves up on three subway trains and a bus, killing 52 people and themselves. Four more bombers tried a similar attack two weeks later, but their devices failed to fully explode.

British authorities say they have foiled 19 plots since the middle of 2013, six of them since a van and knife attack on Westminster Bridge and Parliament in March, which killed five people.