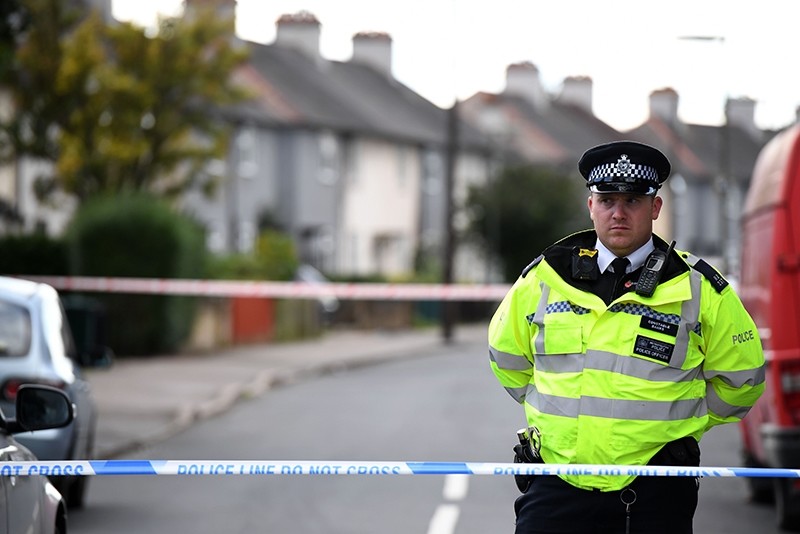 British police made "significant" arrests in the urgent manhunt for suspects a day after the London subway blast that injured more than two dozen people, authorities said.

Police said that an 18-year-old man was arrested Saturday by Kent police in the port of Dover on the English Channel. He is being questioned under the Terrorism Act. Dover is a major ferry port for travel between Britain and France.

"We have made a significant arrest in our investigation this morning," Deputy Assistant Police Commissioner Neil Basu said. But he warned that the investigation was ongoing and the terrorist threat level remains at "critical," meaning a government task force that includes the security services believes another attack is imminent.

Basu's comments suggested that other dangerous suspects may still be at large.

The 18-year-old suspect hasn't been charged or identified. Police say he will be brought to a south London police station for more questioning. Police haven't said if he is suspected of planting the bomb or if he played a supporting role in a possible plot.

The 21-year-old man was arrested in west London at around 23:50 (2250 GMT) on Saturday, the capital's Metropolitan Police said in a statement.

He is in police custody, it added.

Authorities had increased the terrorism threat level to "critical" late Friday, after a bomb partially exploded during the morning rush hour.

Police are combing through closed-circuit TV images and have extensively studied the remains of the device without giving details about it. But images from inside the subway car after the blast showed that the device was contained in a bucket with wires hanging out of it and that it was concealed in a plastic shopping bag.

The train hit by the bomber at Parsons Green station in southwest London had video cameras in each car, and the London Underground network has thousands of cameras at the entrances to stations and along the labyrinth of subterranean and aboveground passageways leading from the entryway to the trains.

Officials have hinted there may be more than one person involved, but haven't released details in what is termed an ongoing and covert inquiry.

Prime Minister Theresa May said raising the threat level to its highest point was a "proportionate and sensible step." Police called on the public to be vigilant.

The soldiers will add to the armed police presence Saturday at public places to deter attacks after the Friday morning rush-hour blast on a District Line train. No arrests have been made. The explosion and an ensuing stampede at the station injured 29 people. None of the injuries, some of them burns, were believed to be life-threatening.

The bomb went off around 8:20 a.m. Friday as the train, carrying commuters from the suburbs — including many school children — was at Parsons Green station.

The station was reopened Saturday, officials said, restoring some normalcy to London's transport network after a day of severe disruption. There was no sign of panic among Londoners and the weekend life of the city continued undeterred by the raised threat level.

Officials said the bomb was intended to do grave harm to commuters. Analysts said the injuries would have been far worse had the entire device exploded.

"They were really lucky with this one. It could have really become much worse," said terrorism specialist Magnus Ranstorp of the Swedish Defense University.

The Daesh terror group claimed responsibility for the attack, which it said was carried out by an affiliated unit.

Britain has endured four other attacks this year, which have killed a total of 36 people. The other attacks in London — near Parliament, on London Bridge and near a mosque in Finsbury Park in north London — used vehicles and knives.

In addition, a suicide bomber struck a packed concert hall in Manchester in northern England, killing 22 people. That attack in May also briefly caused the threat level to be set at "critical."