Encouraged by polls, far-right AfD steps up attacks on Islam, migrants ahead of German elections 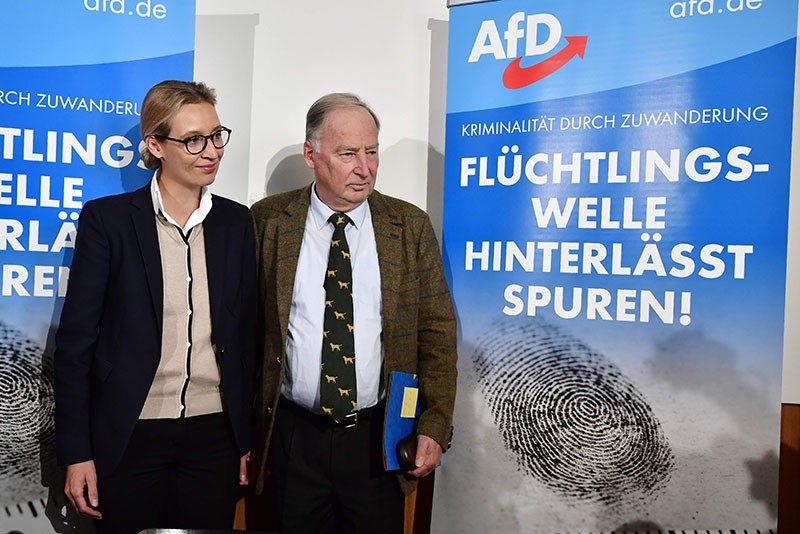 The leading candidates of the anti-immigration and Islamophobic party AfD (Alternative fu00fcr Deutschland), Alexander Gauland and Alice Weidel, pose ahead of a press conference about immigration and Islam on September 18, 2017 in Berlin (AFP Photo)
by Compiled from Wire Services Sep 18, 2017 12:00 am

Germany's far-right Alliance for Germany (AfD) party ramped up attacks Monday against immigration and Islam as its poll ratings jumped in the final stretch of election campaigning, while Chancellor Angela Merkel's party dipped.

The Muslim religion "does not belong in Germany", said a top candidate of the Alternative for Germany, Alexander Gauland, who argued that its "political doctrine is not compatible with a free country".

"Islamist rhetoric and violence and terror have roots in the Quran and in the teachings of Islam," he told reporters.

In a document released by the party on Monday to coincide with its press conference, the AfD said it considered Islam not as a religion but as a "religious-political doctrine" and that it does not differentiate between Islam and Islamism.

The paper also states that "Islam does not belong to Germany," a reference to Merkel's comment in 2015 that Islam "belongs to Germany" in what was then considered a clear repudiation of anti-immigration protests taking place in Dresden and elsewhere.

According to data collected in 2016, there are between 4.4 and 4.7 million Muslims living in Germany, which represents about 5.5 per cent of the overall population. Slightly less than half (45 per cent) of them have German citizenship.

Gauland said AfD wants a ban on minarets and public calls to prayer from mosques, a ban on headscarves for teachers and students, and for imams to lead prayers only in German.

Gauland and the other top AfD candidate, Alice Weidel, have stirred controversy before Sunday's general election.

Gauland has argued Germany should be proud of its veterans of two world wars. And Weidel has reportedly employed an asylum seeker without paying tax, a claim she has denied.

Latest polls show the AfD at 10-12 percent, up from eight-10 percent, potentially making it Germany's third-strongest party ahead of the pro-business Free Democrats (FDP) environmentalist Greens and far-left Die Linke.

But Merkel's CDU and its Bavarian allies CSU slipped two points to 36 percent, close to the all-time low of 35 percent when the Social Democrats (SPD) led by Gerhard Schroeder defeated them in 1998.

Merkel's conservative alliance however still commanded a huge lead over the SPD of her top rival Martin Schulz, which slipped to 23 percent.

The trend suggests the AfD will not only be the first right-wing nationalist party to enter the German parliament since 1945 but, depending on what coalition emerges, could also lead the opposition in the Bundestag.

Weidel's ambitions do not stop there. She told the Frankfurter Rundschau daily on Saturday that "the aim of all parties is not to be the opposition, but to govern".

"All our lawmakers should gain professionalism very quickly during the first term, so that by 2021 we are able to govern."

Founded as an anti-euro party, the AfD recorded a surge in support after it began capitalizing on unease in Germany over the arrival of more than a million asylum seekers since 2015.

Its members now sit in 13 of 16 state assemblies and, eyeing the national parliament, have plastered towns and cities with posters carrying the slogans "Burkas? We prefer bikinis" or "New Germans? We make them ourselves!"

Its supporters have loudly disrupted Merkel's rallies, where they loudly jeer, boo and whistle in a bid to drown her out.

One such protester -- who shouted "traitor" at Merkel on Saturday in her Baltic coast constituency Stralsund -- said he was voting AfD because "the issues they raise relate to me".

"For me, she is not electable, and untenable for the people," said the man, who identified himself only as a truck driver born in Stralsund.

As alarm has grown over the AfD's rise, Schulz, who has described the party as "far-right" and its leaders as "racists", warned however against ostracizing its supporters.

"We must fight against the leaders of the party, but we must not attack their sympathizers," said the SPD candidate.

"We must listen to the people who are attracted to the AfD. There's no doubt about it. They must be won back."

A leader of the far-left Linke party, Katja Kipping, also urged voters to close ranks and stop the AfD from becoming the biggest opposition force in Germany.

"Those who want to stop a right-wing opposition leader must rely on the left," she told national news agency DPA.