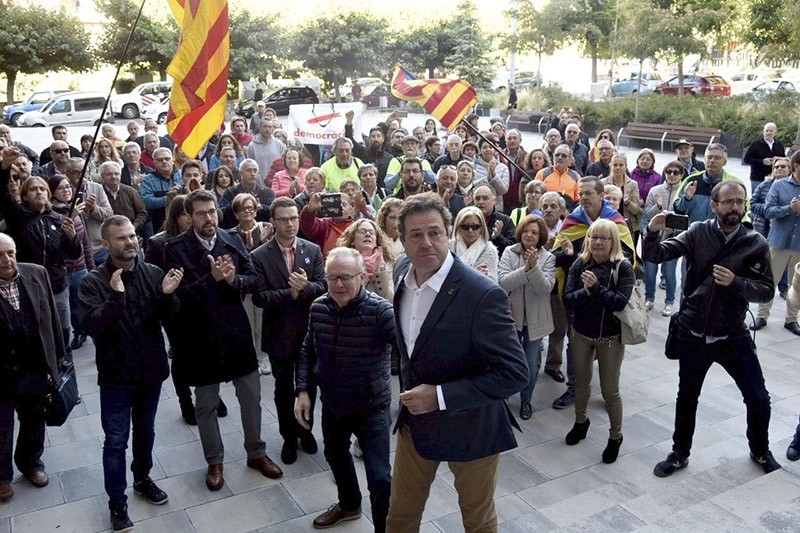 The first of more than 700 mayors under investigation for supporting a planned independence referendum for Spain's northeastern region of Catalonia have appeared before prosecutors, but refused to testify.

The mayors of the small towns of Oliana, Pont de Suert and Mollerussa were greeted by supporters who shouted "we will vote" after their appearances Tuesday.

Years of separatist feeling in the industrial northeastern region will come to a head in less than two weeks as the fiercely pro-independence regional government calls a referendum on splitting from Spain.

Spain's Constitutional Court has ordered the Oct. 1 referendum suspended and the central government is waging myriad legal battles to halt it, claiming it is illegal.

"Voting is not a crime," said Marc Solsona, mayor of the town of Mollerussa, one of nearly 750 mayors facing charges of civil disobedience, abuse of office and misuse of public funds, as he left the state prosecutor's office in Barcelona.

"I'm just the mayor and I have to serve my people. I am committed to the people being able to vote on Oct. 1 in accordance with the law passed by the Catalan parliament and what happens to me is not important," he said.

Catalonia, which represents a fifth of Spain's 1.1-trillion-euro economy, has some 900 mayors. The mayor of the capital, Barcelona, is not under investigation.

So far, 745 of 948 municipal leaders have said they will provide venues for the referendum.

Although polls show less than half of Catalonia's 5.5 million voters want self-rule, most in the wealthy northeastern region want the chance to vote on the issue.