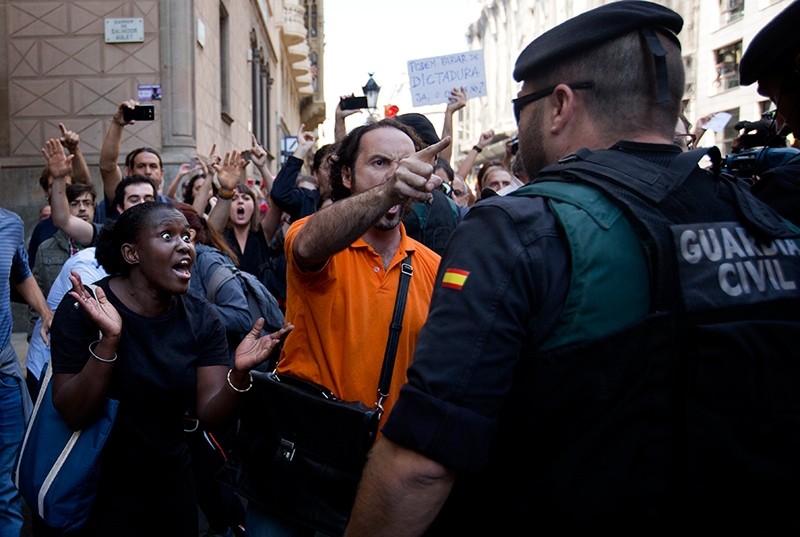 Catalan pro-independence supporters have scuffled with Spanish Civil Guard officers escorting a government official arrested as part of a crackdown by national authorities on Catalonia's plans to hold a secession referendum.

The protesters tried to block the officers as they took Xavier Puig away from the headquarters of the region's department of external affairs in downtown Barcelona. Puig, the IT manager in the department, was one of at least 12 officials arrested Wednesday in police raids.

In central Barcelona, thousands of protesters gathered near Jove's office, many draped in red and yellow Catalan flags, chanting "Independence!" and "We will vote!"

Anna Sola, an unemployed 45-year-old, said she rushed out to protest after hearing about Jove's arrest on the news and through text messages from friends.

"They are attacking our institutions, those that we voted for, just for simply doing what the people want," she said.

"It is shameful what is happening in Catalonia, there are no words for it."

"Let's go out to defend our institutions in a non-violent way. They made a big mistake, we wanted to vote and they declared war," its president Jordi Sanchez said in a statement.

The protesters tried to block a police vehicle and some scuffles ensued. There were no reports of arrests or injuries.

Several hundred people are protesting the arrests and shouting pro-independence slogans in different parts of Barcelona and other Catalan towns.

The National Catalan Assembly civic group the driving force behind the secession push is calling on residents to rally peacefully on the city's Las Ramblas boulevard.

The operation comes amid mounting tensions as Catalan leaders press ahead with preparations for an independence referendum on October 1 despite Madrid's ban and a court ruling deeming it illegal.

Police were searching the Catalan government's offices of economic affairs, foreign relations and the presidency, the spokesman said.

Catalan President Carles Puigdemont accused Madrid of imposing a "de facto" state of emergency to try and stop the referendum.

Among others the Spanish police arrested Catalonia's junior economy minister Josep Maria Jove, who is also an aide to the region's vice president Oriol Junqueras as part of a raid on regional government offices ahead of an unauthorized referendum on independence, sources within the Catalan government said.

The operation comes a day after police seized a trove of documents related to the independence referendum from the offices of private delivery company Unipost in the Catalan city of Terrasa.

Pro-separatist parties captured 47.6 percent of the vote in a September 2015 regional election in Catalonia billed as a proxy vote on independence, giving them a narrow majority of 72 seats in the 135-seat Catalan parliament.

A survey commissioned by the regional government in July showed 49.4 percent of Catalans were against independence while 41.1 percent were in favour.

Over 70 percent of Catalans want a legal referendum on independence to settle the issue.