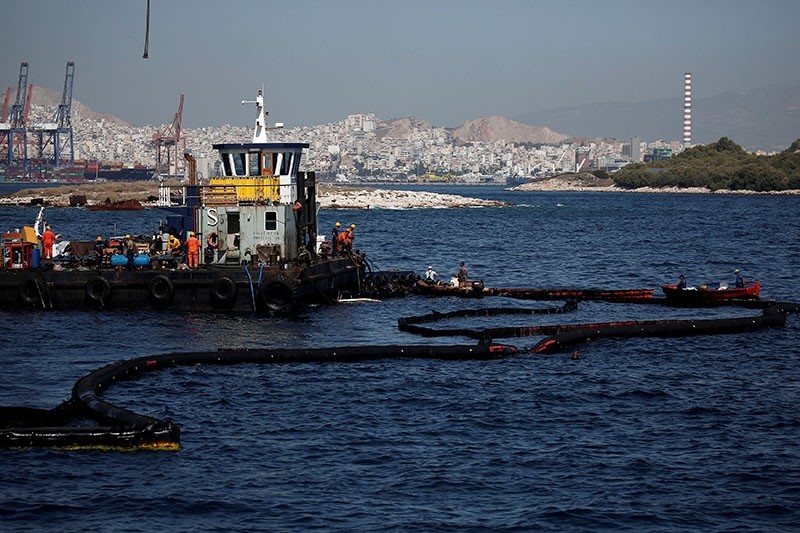 Workers take part in clean up and pollution containment operations at the area where a small oil tanker sank on September 10 off the shores of Salamina island, Greece, September 20, 2017. (Reuters Photo)
by Associated Press Sep 20, 2017 12:00 am

The captain and chief mechanic of a ship commissioned for an oil-spill cleanup operation outside Athens have been arrested on fuel smuggling charges, further complicating efforts to contain the oil that has polluted the Greek capital's coastline.

The Merchant Marine Ministry said Wednesday that the two were arrested on smuggling charges after undeclared fuel was found on the tanker ship Lassea.

The vessel was being used to recover oil from the wreck of the Agia Zoni II tanker which sank on Sept. 10 while anchored near Greece's main port of Piraeus. However, it had to be swapped out this week as its seaworthiness certificate ran out.

The recovery effort was suspended Tuesday, with a replacement vessel due to be selected Wednesday, ministry officials told the AP.

Oil slicks from the wreck have extended from the island of Salamina near where the sinking occurred, to the entire length of the Athens coast. Local authorities in most of affected areas have issued an indefinite advisory to avoid swimming.

Though it seems that serious damage to wildlife has been avoided for now, Margarita Tzali of the Greek Wildlife Care Association warned that the negative effects may not materialize for a while.

"Consequences can appear as late as 160 days after the (oil spill)," She said.

In Parliament Wednesday, opposition parties renewed demands for Merchant Marine Minister Panagiotis Kouroumplis to resign, arguing that his response to the sinking had been delayed and inadequate in the early stages of the containment effort.

Kouroumplis denied the allegations, and told lawmakers: "I assure you that the effort we are undertaking is enormous, perhaps unprecedented in this country. We have heard much criticism, but no suggestions about what should have been done differently."

He said the cleanup effort would last another 30-40 days.

"I believe our response was effective," Kouroumplis said.

The environmental group Greenpeace also strongly criticized the government and its decision to suspend the effort to pump oil out of the sunken tanker.

"If the leadership of the Merchant Marine Ministry has moved heaven and earth, we haven't seen it on the island of Salamina. Most of its polluted beaches have been abandoned, and the oil spill is still covering a large area," Greenpeace's Dimitris Ibrahim said.

At the coastal suburb of Alimos, where many Athenians normally travel to swim, local mayor Andreas Kondylis said clean up resources were not being used effectively.

"Businesses, fishermen, and residents have all been affected, and there is a deep sense of disappointment and anger," he said, noting that seaside visits provided relief for many Greeks hit by the country's severe financial crisis.

"Many residents feel that the only thing they have left is a chance to swim. Now they don't even have that."