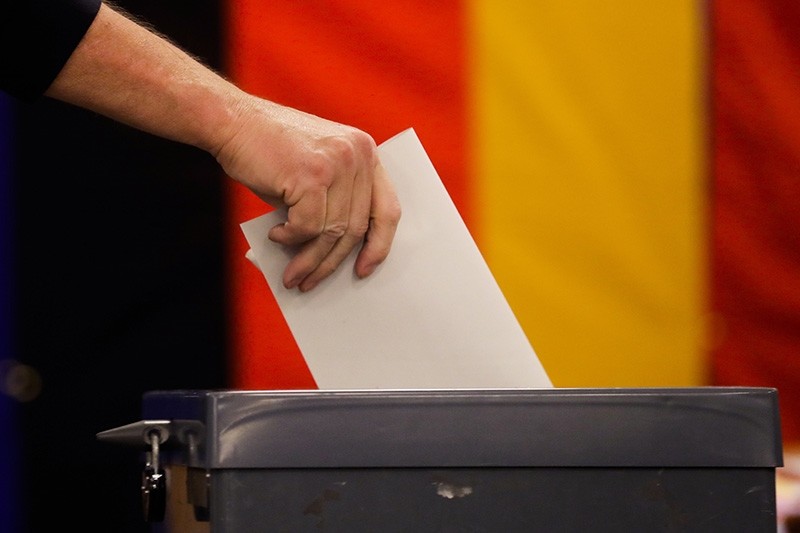 Germans voted in a general election Sunday expected to hand Chancellor Angela Merkel a fourth term while the hard-right nationalist Alternative for Germany (AfD) party is tipped to make history by winning its first seats in the national parliament.

Polling stations opened at 0600 GMT in for 61.5 million eligible voters in Europe's top economy and will close at 1600 GMT.

With four other parties predicted to clear the five-percent bar to enter into the Bundestag, the highest number since the 1950s, it could take months of coalition wrangling before the next government takes shape.

Mainstream parties however have already ruled out talking to the anti-Islam, anti-immigration AfD, which is polling at 11 to 13 percent and could emerge as Germany's third-strongest party.

Alarmed by the prospect of what Foreign Minister Sigmar Gabriel branded "real Nazis" entering the Bundestag for the first since the end of World War II, politicians used their final days of campaigning to urge voters to reject the right-wing populist AfD.

"This Alternative for Germany is no alternative. They are a shame for our nation," former European Parliament chief Schulz said at a rally on Friday.

The latest surveys put support for Merkel's conservative block at 34-36 percent, with the SPD trailing at 21-22 percent -- which would translate into a historic low for the party.

Despite bracing for a drubbing, Schulz was all smiles as he and his wife cast their ballot in his western hometown of Wuerselen.

Similar survey results showed support for Die Linke (Left Party) at 11 percent, with liberal Free Democrats (FDP) just behind at 9 percent, follow by the environmentally-friendly the Greens at 8 percent.

Turks not enthusiastic to go to the polls

The Alliance of German Democrats (AD-D), a new party recently formed by ethnic-Turkish citizens, is running for the first time in the federal election.

It has protested mainstream parties for not taking a strong stance against growing anti-Turkish sentiment in the country.

A half of the three million people with Turkish roots in Germany have a German citizenship. Approximately 800,000 ethnic-Turkish citizens are eligible to vote, according to estimates.

Amid an ongoing diplomatic row between Berlin and Ankara over a broad range of issues, many Turks are believed to skip the polls this time, which would negatively affect the votes of SPD that Turks traditionally tended to vote.

Turkish President Recep Tayyip Erdoğan previously called on Turks to not to vote for "hostile" parties in the elections, and his definition included almost all top contenders in the elections.

Merkel, 63, whose campaign events were regularly disrupted by jeering AfD protesters, said at her final stump speech in the southern city of Munich that "the future of Germany will definitely not be built with whistles and hollers".

Observers say a strong showing by the AfD, which has capitalized on anger over the influx of a million migrants and refugees since 2015, will hit Germany like a bombshell.

"If the AfD becomes the leading opposition party, they will challenge key themes," said Thorsten Benner, director of the Global Public Policy Institute in Berlin. "It will very much change the tone of debate in parliament."

Aside from the populist noise, the past two months of campaigning have been widely criticized as lackluster, with few hot-button issues dividing the main contenders.

Commentators say Merkel's reassuring message of stability and prosperity has resonated in greying Germany, where more than half of the 61 million voters are aged 52 or older.

Europe's most powerful woman appears all but assured of winning another term, matching the 16-year reign of her mentor Helmut Kohl.

Schulz on the other hand has struggled to gain traction with his calls for a more socially just Germany at a time when the economy is humming and employment is at a record low.

The SPD has also found it hard to shine after four years as the junior partner in Merkel's left-right "grand coalition", marked by broad agreement on major topics, from foreign policy to migration.

In the final stretch, the more outspoken Schulz told voters to reject Merkel's "sleeping-pill politics" and vote against "another four years of stagnation and lethargy".

Germany's best-selling daily Bild at the weekend said 61-year-old Schulz found his voice as he neared the finish line, and praised him for "fighting until the end".

"Germany doesn't just need a chancellor. It also needs an opposition leader. Schulz has started to sound like one," the newspaper wrote.

The CDU and the SPD have signaled they aren't keen to continue their loveless marriage, and many rank-and file SPD members believe the traditional working class party would benefit from a stint in opposition to rekindle its fighting spirit.

This would leave the presumed winner Merkel in need of new coalition partners -- possibly the liberal and pro-business Free Democrats, who are hoping for a comeback after crashing out of parliament four years ago.

Another potential partner would be the ecologist and left-leaning Greens party, which, however, starkly differs with the FDP on issues from climate change to migration policy.

Pundits have pointed out that a significant number of voters remained undecided until the last minute, suggesting the final outcome could throw up some surprises depending on turnout.

In the western city of Frankfurt, 66-year-old Harald said he was still unsure who to vote for as he headed home from his night shift as a security guard in the leafy Westend suburb.

"I will make up my mind once I'm in the polling booth. You can forget about the AfD," he told AFP.

Bernhard Sommerfeld, a 62-year-old book seller, who cast his vote Sunday morning in Berlin after the opening of the polling stations at 8 a.m. (0600GMT).

"I was really undecided," Sommerfeld told AP. "I didn't know which party I should cast my vote for — it was very difficult."

Only a few people came to the polling stations on a cold and drizzly morning in the German capital, which also hosted its annual marathon Sunday. Many streets in the city were blocked as runners zigzagged their way through Berlin in an often festive mood with local bands playing on street corners and bystanders cheering and applauding.

Jens Schubert, an orchestra manager, also said this election was a difficult one for him.

"I usually vote for the same party from the left spectrum — the Green Party — but this time I voted for a different party," the 54-year-old said as he came out of a polling station in Berlin's Mitte neighborhood where Merkel was also expected to cast her vote later in the day.