Madrid takes over Catalan police as thousands protest for secession 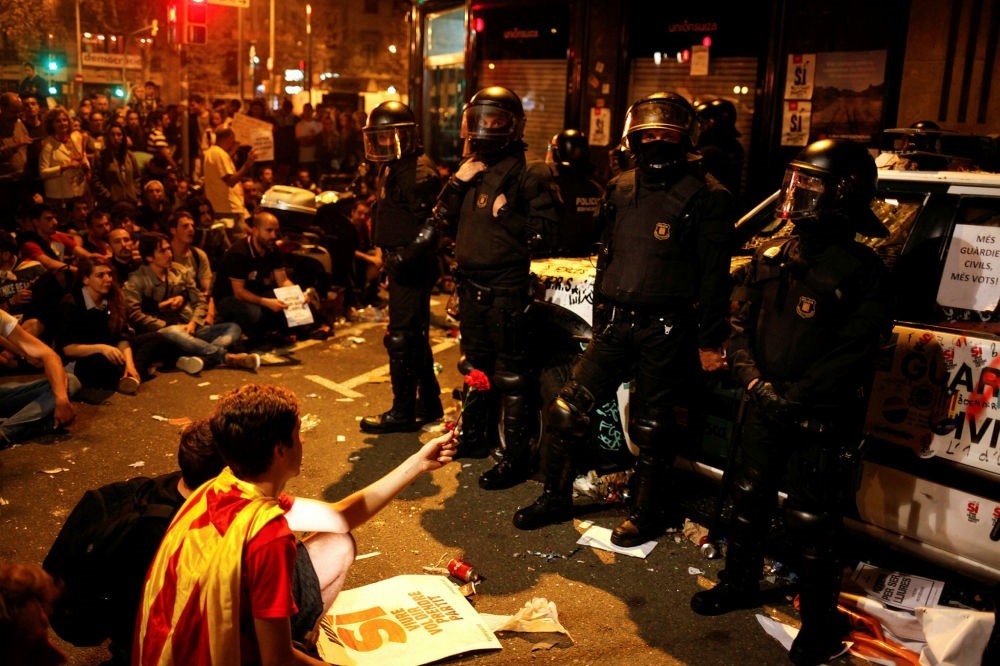 Officers of the Civil Guard stand next to their patrol car, which was damaged by protesters outside the Catalan region's Economy Ministry in Barcelona, Sept. 21.
by Angelos Berberakis Sep 25, 2017 12:00 am

The Spanish Police's Colonel Pérez de los Cobos has been tasked by the public prosecutor's office with taking over control of the Catalan Mossos d'Esquadra [Squad Lads/Squaddies] to maintain order in the streets as a new referendum will take place on Oct. 1.

The order will only remain in place until after the referendum takes place, the Catalan La Vanguardia reports. The Mossos d'Esquadra is technically a civil police force, which can be countermanded by the Spanish national police and the civil guard. Their salaries are also paid for by Catalan citizens, who pay taxes to Madrid, which then returns the money to be used for public expenditure in the region.

An additional 3,000 to 4,000 from the rest of Spain will also be arriving in Catalonia, joining the 5,000 also based in the region in order to supervise such matters as maintaining law and order but also handing immigration as well as conduct counter-terrorism operations.

Meanwhile thousands of Catalan separatists are rallying in public squares in Barcelona and other cities, many of whom are carrying the Catalan independence flags.

Madrid is justifying the move, saying that the situation could spiral out of control as it almost has in the past, and that the Mossos d'Esquadra have been uncooperative during previous protests-turned violent.

The Catalan law has been deemed illegal by Catalan Statutes of autonomy, which require a two third majority in the parliament for any change in the region's status.

The referendum itself is also illegal according to the constitution and the Spanish Constitutional Court.

The government in Madrid has long opposed any Catalan self-determination referendum, citing the Spanish constitution.

"It would be sensible, reasonable and democratic to stop and say, there won't be a referendum, which they know won't happen," said Prime Minister Mariano Rajoy as quoted by AFP.

Despite the Catalan government's outreach to members of the European Union for support, other countries on the continent have decided that it is a strictly internal Spanish issue and have not interfered in any official capacity.

Legally, the constitutional court has annulled the Catalan law allowing it to hold such a referendum, but the regional government is still pushing for it to be held next Sunday.

In addition to the Catalan government, the region's municipalities have been highly uncooperative with Madrid as well, with just 41 of the 726 saying that they would refuse to support the referendum.

The Catalan people's opinion on independence may not be as clear-cut as the constant protests might have one think.

In any case, much like in many other issues, the region's populace in deeply divided on the issue and, it's not just a matter of a perceived oppressive Spanish central government versus an entire group calling for self-determination.