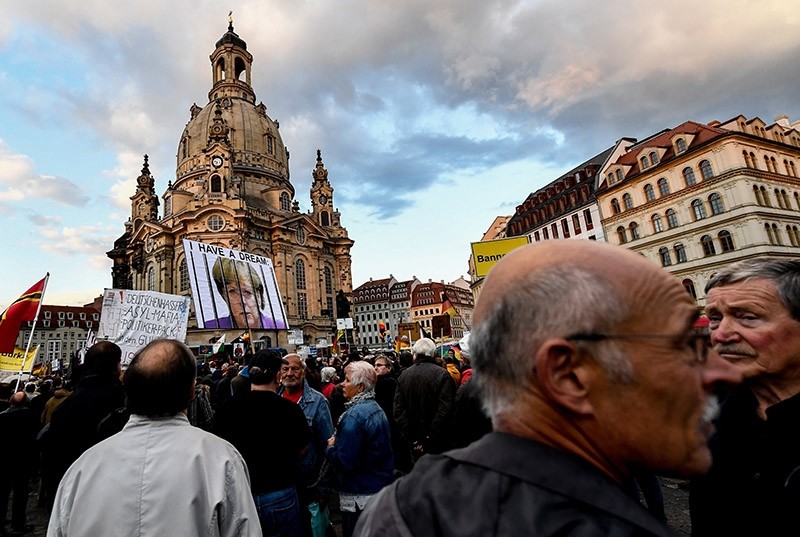 Supporters of the 'Pegida' movement and German right-wing populist party Alternative for Germany (AfD) attend a demonstration infront of the Frauenkirche church at Neumarkt square in Dresden, Germany, 18 September 2017. (EPA Photo)
by Daily Sabah Sep 26, 2017 12:00 am

Some 1,500 sympathizers of the xenophobic and anti-Islam "Pegida" movement gathered Monday in eastern Germany's Dresden to celebrate the latest success of the far-right Alternative for Germany (AfD), which obtained 12.6 percent of the votes in Sunday's election, taking the third place.

Pegida founder Luzt Bachmann called the election result "only a beginning" and said that the party aimed to appoint a minister president for the German state of Saxony after the upcoming parliamentary election in 2019.

The AfD will be the first far-right party to enter the German parliament in more than half a century thanks to its supporters in eastern Germany, where it ranked second with over 20 percent after Chancellor Angela Merkel's Christian Democratic Union (CDU).

According to latest surveys, the party was mostly favored by eastern German men.

During the celebration rally, which was also joined by some AfD representatives, hundreds of posters reading "lying press" and "victory" could be seen.

Petry also announced Monday at a news conference that she would not be part of the AfD's group in the German parliament and instead be an individual member of parliament in the lower house.

Counter protesters tried to disrupt Monday evening the Pegida rally in Dresden with boos, however were only joined by a small number of people.

Merkel's CDU and her allied Christian Social Union (CSU) got Sunday over 33 percent, maintaining their status as the biggest party in the parliament. The CDU-CSU union was followed by the Social Democratic Party (SDP) with 20 percent, which obtained its worst election result in the postwar era.