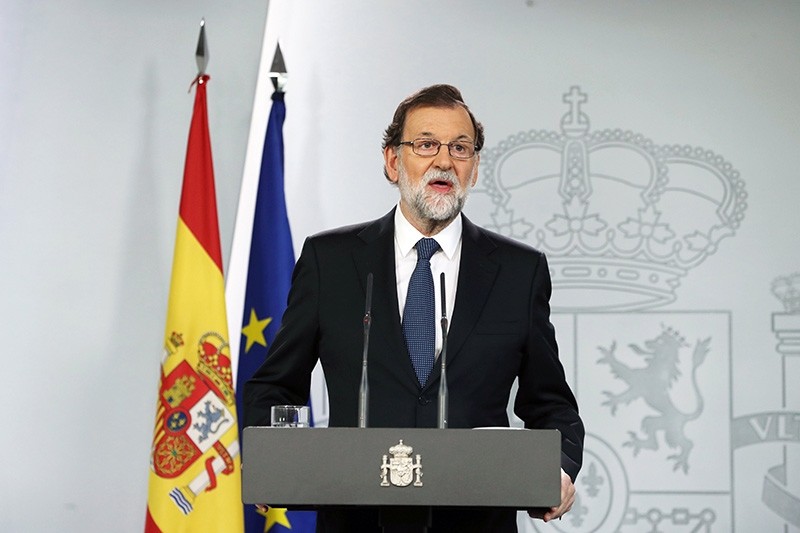 Spanish Prime Minister Mariano Rajoy said Sunday that the rule of law had prevailed in Catalonia because an independence referendum in the region prohibited by the courts had been blocked.

"Today there has not been a self-determination referendum in Catalonia. The rule of law remains in force with all its strength," he said in a televised address.

The people of Catalonia had been tricked in to taking part in the banned vote, Rajoy said, adding that the referendum was a strategy by the regional government against legality and democratic harmony and was a "path that leads to nowhere."

"We had to do what we had to do. Today democracy prevailed because the constitution was upheld," Rajoy said, adding that the referendum was "a mockery of the very essence of democracy."

Summoning all parliamentary political parties to discuss the crisis, Rajoy said he will "never close any door" to dialogue, "but always within the bounds of the law and of democracy."

Spainish foreign minister said the violence in Catalonia in a banned independence referendum was "unfortunate" and "unpleasant" but "proportionate."

In an interview with The Associate Press, Foreign Minister Alfonso Dastis blamed the violence exclusively on Catalan President Carles Puigdemont and his regional government.

Dastis said "if people insist in disregarding the law and doing something that has been consistently declared illegal and unconstitutional, law enforcement officers need to uphold the law."

Dastis added, however, "it was a proportionate use of force, there was no excessive violence and it was a reaction to the situation they were faced with when they were prevented from doing their job."

Meanwhile, Catalonia's health services have increased the number of people injured by police during the referendum to 761 people who were treated at hospitals.

The service said two people are in serious condition in hospitals in Barcelona, adding that another person is being treated for an eye injury that fits the profile of having been hit by a rubber bullet.

Spanish riot police smashed their way into polling stations across the northeastern region to try and stop Sunday's referendum on independence. Spain's top court had suspended the vote but local authorities went ahead anyway.