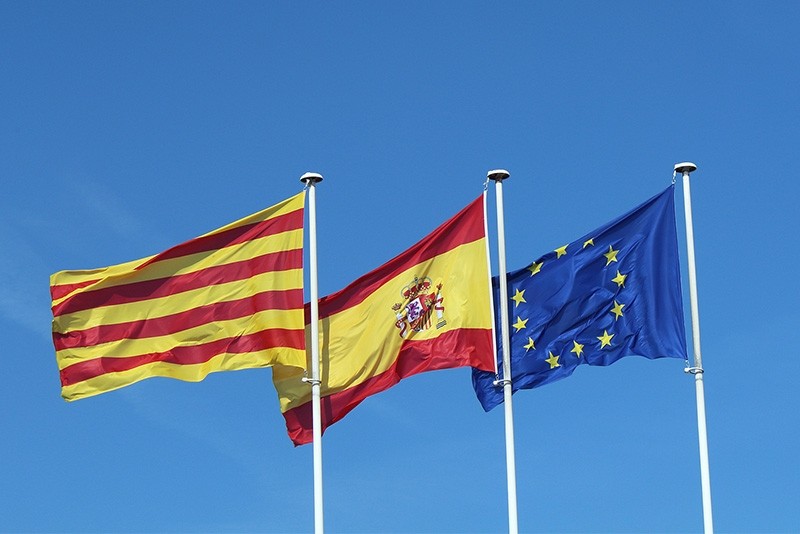 Breaking weeks of virtual silence on Catalonia's banned independence referendum, the European Commission (EC) said the referendum was "not legal" under Spanish law and was an "internal matter to be dealt with the constitutional order" for the Spanish government.

Commenting on the EU's legal position on the matter, EC spokesman Margaritis Schinas said an independent Catalonia would also have to leave the EU if it did vote for independence in a legal referendum. "The commission believes that these are times for unity and stability, not divisiveness and fragmentation. We call on all relevant players to now move very swiftly from confrontation to dialogue. Violence can never be an instrument in politics," Schinas said in a statement to reporters in Brussels.

Schinas said the bloc trusted in the "leadership of Prime Minister Mariano Rajoy to manage this difficult process in full respect of the Spanish Constitution and of the fundamental rights of citizens enshrined therein."

Although it has been asked repeatedly whether the European Commission condemned the violence that resulted from a police crackdown at the polls, Schinas refused to elaborate on the subject.

"For the European Commission, as President [Jean-Claude] Juncker has reiterated repeatedly, this is an internal matter for Spain that has to be dealt with in line with the constitutional order of Spain."

In the weeks leading up to the vote, the European Commission steadfastly refused to comment in detail on what it called an "internal matter."

Gianni Pittella, the head of the left-wing bloc in Parliament, lamented a "sad day for Spain and for all of Europe." Former Belgian Prime Minister and liberal member of European Parliament Guy Verhofstadt - parliament's Brexit negotiator - condemned both the holding of an illegal vote and Madrid's use of "disproportionate violence" to stop it, urging "de-escalation" and negotiations for a solution.

Vice President of European Parliament Ramon Luis Valcarcel has described the Catalan referendum as a coup against Europe, saying: "Today, we have witnessed a nationalistic propaganda act which is undemocratic; a coup attempt against Spanish democracy, and therefore, a coup against Europe," penning an article for Canada's The Globe and Mail.

Valcarcel condemned the referendum, saying Catalans had voted overwhelmingly in the past in approval of Spain's Constitution which says the country cannot be divided.

According to the EP's Valcarcel, Spain is facing its greatest challenge since the failed military coup on February 23, 1981. "Back then, our young democracy was on its own. Today, however, it is an integral part of the EU, which respects and safeguards the national identities and constitutional structure of its member states. An attack on the constitution of one member state is, therefore, also an attack on the EU as a whole. The government of Catalonia is perpetrating such an attack against Spain."