Marseille assailant had seven identities, was released from custody day before attack 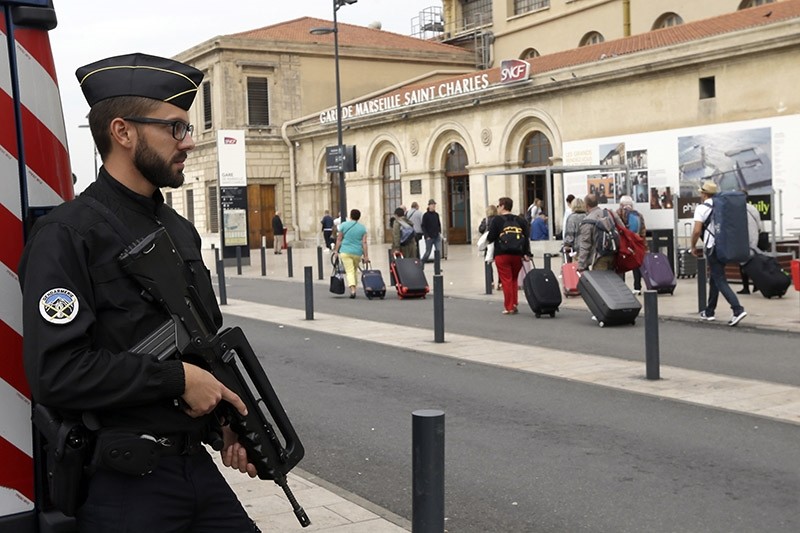 A man who fatally stabbed two women outside Marseille's main train station had been detained for shoplifting and released the day before the attack, and used seven fake identities in previous encounters with police, officials said Monday.

French authorities are studying the suspect's cellphone and working to determine his true identity and whether he had direct links to the Islamic State group, which claimed responsibility for Sunday's stabbing. The assailant was killed by soldiers immediately after the attack, the latest of several targeting France.

The suspect was identified by his fingerprints, which matched those taken during seven previous incidents registered by police since 2005, Paris Prosecutor Francois Molins told reporters.

The attacker didn't have any past convictions in France, Molins said. The man's most recent arrest occurred in the Lyon area Friday — just two days before the train station stabbing.

The man was held overnight for shoplifting, then released Saturday and the charges dropped, Molins said. He added that local authorities had no reason to hold him further based on the ID he gave them — a Tunisian passport.

Interior Minister Gerard Collomb has given investigators a week to determine why police in the eastern city of Lyon let the man go after arresting him on Friday, a day before the attack took place, the interior ministry said in a statement.

Molins said "the method of the attacker" was in line with calls from Daesh to followers in the West to strike vulnerable targets, such as train stations.

The Daesh terrorist group's propaganda agency Amaq claimed the killer was one of its "soldiers", though a source close to the investigation told French Press Agency (AFP) no solid evidence linked him to the group.

The attack in France's second-biggest city followed a string of stabbings around Europe claimed by or blamed on terrorists.

The man killed two 20-year-old cousins, one of them a "brilliant" medical student who was studying in the city, according to Aix-Marseille University chief Yvon Berland.

Her cousin, a nursing student from Lyon, was visiting her for the weekend.

Molins confirmed that witnesses heard the attacker shout "Allahu Akbar" (God is greatest) as he lunged at the women with a 20-centimeter (eight-inch) knife before threatening soldiers, who shot him dead.

The attacker's fingerprints showed he had had seven brushes with the law since 2005 including the shoplifting arrest on Friday.

He presented the Tunisian passport to police, saying he was divorced, used "hard drugs", and had no fixed address.

French President Emmanuel Macron tweeted Sunday that he was "deeply angered by this barbaric act".

The attack comes as parliament prepares Tuesday to vote on a controversial anti-terror bill that transfers some of the exceptional powers granted to police under a 22-month-old state of emergency into national law.

France has been under a state of emergency since the Daesh gun and bomb attacks in Paris in November 2015 — part of a string of terrorist assaults that have left more than 240 people dead over the past two years.

But critics warn that making parts of the state of emergency permanent would give police too much free rein, undermining freedoms in a country seen as a beacon for human rights.

Knives have been the weapon of choice in a string of smaller-scale attacks in recent months, mainly targeting troops from the 7,000-strong Sentinelle anti-terror force set up to patrol the streets and vulnerable sites such as stations and tourist attractions.

In most cases, the attackers were shot dead at the start of their rampage, before they could kill others.

The Marseille attack came only days after Daesh released a recording of what it said was its leader Abu Bakr al-Baghdadi urging his followers to strike their enemies in the West.

The French government has deployed troops and its air force to the Middle East and is a leading partner in the U.S.-led international coalition fighting Daesh in Iraq and Syria.