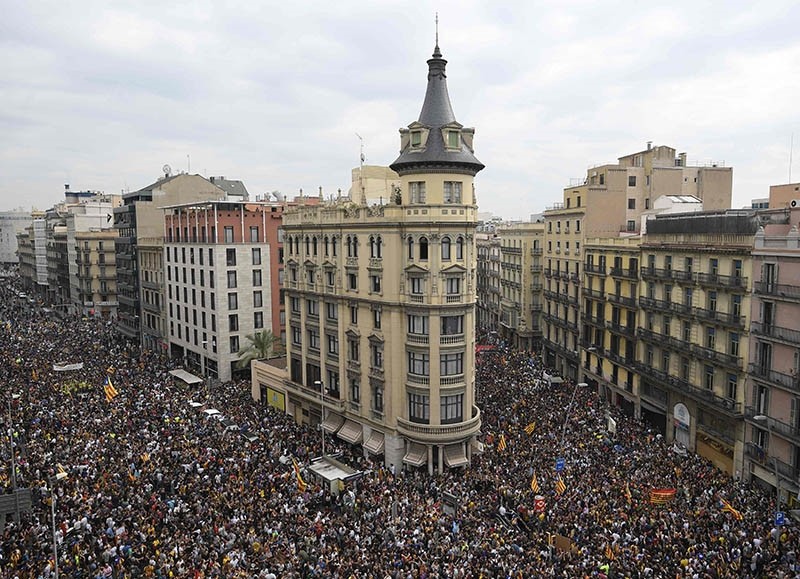 Protesters gather at the Placa de la Universitat square during a general strike in Catalonia called by Catalan unions in Barcelona, on Oct. 3, 2017. (AFP Photo)
by Compiled from Wire Services Oct 03, 2017 12:00 am

Shouting "occupation forces out" and "the streets will always be ours," hundreds of thousands turned out in Barcelona on Tuesday to protest police violence during a banned weekend independence referendum in Catalonia.

Columns of people converged onto the city center as the region went on general strike. A police helicopter flying overhead drew angry whistles as Catalans reel from the unrest that marred parts of the Spain's northeast region on Sunday.

"On October 1, we were an occupied country, and they haven't left yet," Antonia Maria Maura, a 56-year-old primary school teacher, said of national police and Guardia Civil forces that were deployed to Catalonia from other parts of Spain to stop the vote.

City police said 300,000 people were marching in the streets of Barcelona in a peaceful atmosphere, though there were tense moments as protesters said they feared agitators would try and sow discord.

Madrid had repeatedly warned Catalan separatist leaders that it could not go ahead with the referendum in a region deeply divided over independence, but they did so anyway.

As people queued at polling stations, riot police moved in to prevent them from voting, in some cases hitting people with batons and shooting rubber bullets, injuring over 90 people according to regional authorities.

The Catalan government said 90 percent of the more than 2.2 million people who managed to cast their ballot voted for independence -- but over half of eligible voters did not turn out in this region roughly the size of Belgium.

"People are angry, very angry," said Josep Llavina, a 53-year-old self-employed worker who had traveled to Barcelona from a nearby town to participate in the protest outside the regional offices of Spain's National Police.

The building became a focal point for protesters, gathering thousands at midday who urged Prime Minister Mariano Rajoy to resign.

"They brought violence with them," Llavina said. They have beaten people who were holding their hands up. How can we not be outraged?"

"Closed for revolution," read a sign at the demonstration, while parents and children from a school used as a polling station on Sunday unrolled a giant banner that students had made.

"Navas-Sagrera for peace and democracy," read the banner with dozens of multi-coloured little handprints.

Nearby, a group of friends wore black t-shirts with the sign "very fragile" pinned onto the back, in a dig at police.

The central government in Madrid is blaming Catalan separatist politicians and grassroots groups for the violence, saying they "plotted to break the law" and drew citizens to an unlawful vote.

"Nothing of this would have happened if the (Catalan) government hadn't declared itself in rebellion, breaking the orders of the courts and lying and tricking people," said Spain's top official in Catalonia, Enric Millo, on Tuesday.

"You can't stop the youth," said Alfredo Vidal, the 68-year-old owner of a dry-cleaning shop, pointing to the hundreds of students walking slowly by, many draped in blue, yellow and red separatist flags.

"When you provoke people, when you offend them, then they react against you," said Vidal.

"I had never seen Catalans putting their hand on their heart during the Catalan hymn," he went on.

"But for about a month now, I've seen them do it, especially the young," he said as an example of increasingly fervent feelings among supporters of Catalan independence since Madrid started cracking down on the planned vote.

Over on the upmarket Paseo de Gracia boulevard, visitors milled in front of architect Antoni Gaudi's quirky Casa Batllo, closed as its employees also took part in the general strike.

"It's a bummer because we're only here for a few days. But it's hard to say my vacation is more important than what is happening here," said Karen Healey, 53, from Portland in the United States.

"I knew of the Basque separatist movement but before this trip, I didn't know Catalonia was looking to separate from Spain," added her husband Brian Cormier.

Earlier in the day, on the Gran Via which cuts through the city centre, Zabi Ullah looked worried as he watched the gathering protesters, ready to pull down the blinds to his convenience store if he saw trouble.

"They've just told me I have to close for the strike," he said of two men who had only just left the store. But he said he was reluctant, needing the money.

He needn't have worried. Over an hour later, a large queue had formed at his store, protesters stocking up on water, beer and crisps as scores of other shops in the neighbourhood were shut.

Carlos Cardello, a 57-year-old engineer, vowed that this huge swell of peaceful protest would not die down.

"We will keep going until someone listens to us," he said.