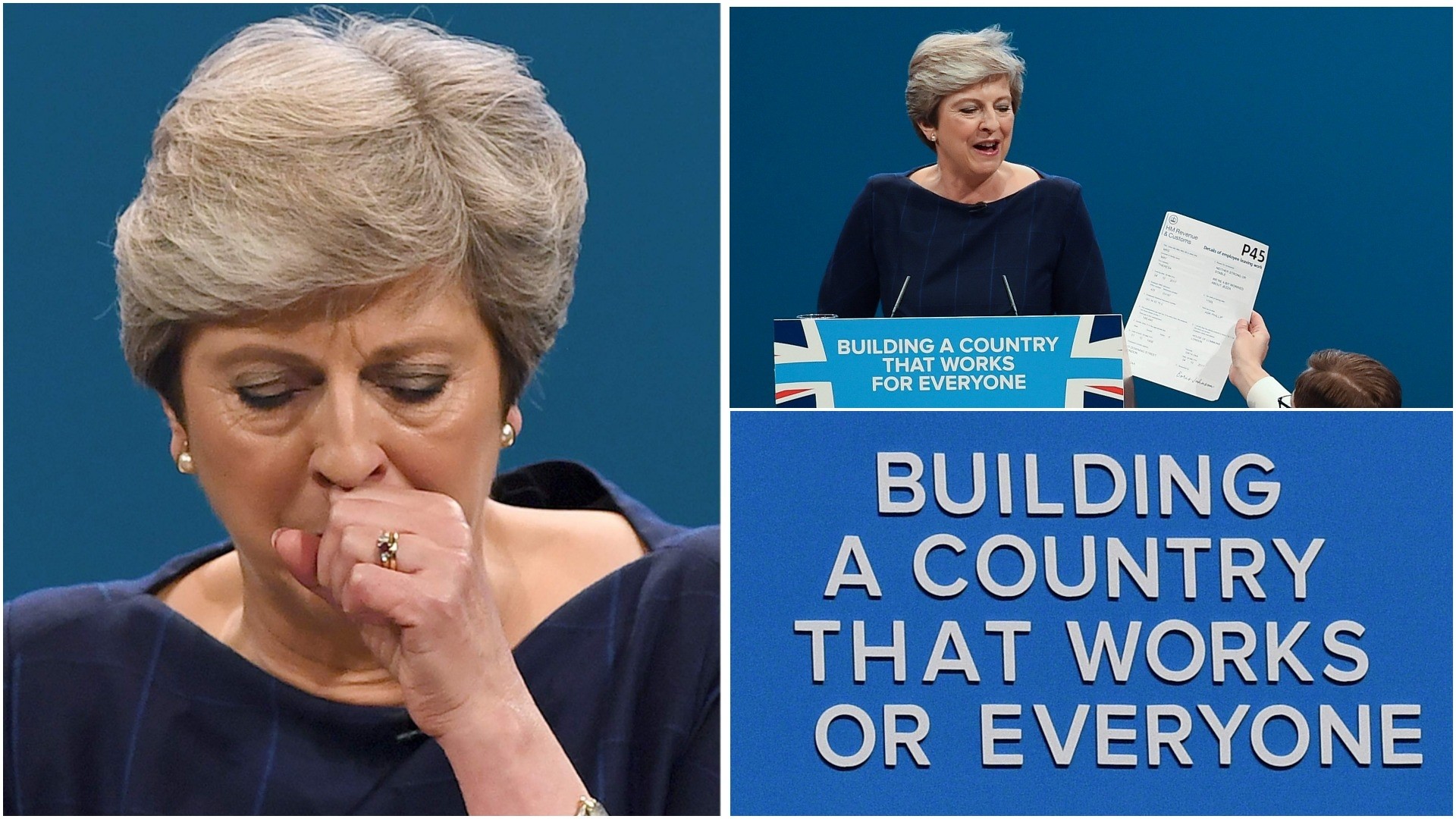 A combination of pictures created on October 4, 2017 shows 3 moments from the speech of Mayu2019s speech on the final day of the Conservative Party annual conference. (AFP Photo)
by Associated Press Oct 04, 2017 12:00 am

Embattled British Prime Minister Theresa May promised to restore the "British Dream" Wednesday, in a nightmare speech that saw her plagued by a cough and interrupted by a prankster, while parts of the backdrop fell down as she was speaking.

In a mishap-prone Conservative Party conference address, May vowed economic help for struggling families for whom "the British Dream that has inspired generations of Britons feels increasingly out of reach."

But a speech intended to strengthen her tenuous grasp on leadership was chaotically interrupted by a comedian who handed May an unemployment form. The party said it was reviewing security after the breach.

It was a shambolic end to a troubled convention. The Conservatives are in a sour mood after June's snap election — called three years early in hopes of bolstering the party's majority in Parliament — saw May's government reduced to a minority administration. The poor result has left May weakened and struggling to unite a government divided over Brexit and other issues.

May needed a strong speech to help fight off rivals to her job, including ambitious Foreign Secretary Boris Johnson.

But things did not go to plan. May struggled with a cough and a hoarse voice that forced her to pause repeatedly.

Midway through the speech a prankster walked up and handed May a P45 — the form given to people being laid off in Britain.

As he was bundled away by security, the joker — identified in media reports as comedian Simon Brodkin — said "Boris told me to do it."

May's office said there would be a thorough investigation. Police said the man, who was briefly detained "to prevent a breach of the peace," had legitimate accreditation for the high-security conference.

Brodkin, whose stage name is Lee Nelson, has pulled off other high-profile stunts including showering international soccer federation president Sepp Blatter with money during a 2015 press conference.

As May neared the end of her televised speech, two letters fell off the slogan on the wall behind her — "Building a country that works for everyone."

When she finished, May was embraced onstage by her husband Philip, as Lenny Kravitz's "Are You Gonna Go My Way?" rang out in the auditorium.

That remains an open question. The speech did not resolve doubts about May's future.

Her struggle to speak could be seen as a symbol of her vulnerability — or of her steely determination to carry on.

Senior Tories rallied to support her. Scottish Conservative leader Ruth Davidson tweeted that "if ever the PM needed a metaphor for service and duty and resolution through adversity, that battling performance was it!"

Others said the speech humanized a politician whose wooden campaigning style has seen her dubbed the "Maybot."

"She completely turned around that tone of the general election," said Conservative lawmaker George Freeman.

May fought back against "Maybot" claims in her speech, saying passion for social justice "burns inside me" and highlighting her work against racism, modern slavery and child sexual abuse.

She even made a rare personal reference, saying "it has always been a great sadness for me and Philip that we were not blessed with children."

The unscripted mayhem overshadowed a substantial speech in which May appealed to middle- and lower-income voters. She promised to put a price cap on energy bills and get government back into the business of building public housing, a role it has largely abandoned since the 1980s, "to help fix our broken housing market."

Undersupply and rising prices have made home ownership an elusive goal for many Britons.

Addressing Conservative members May took responsibility for the election failure, saying "I led the campaign, and I am sorry."

Then she tried to move on, telling ministers to "shape up" and focus on "the daily lives of ordinary working people."

And she called for a more humane politics, saying "people are fed up with the game-playing, the name-calling."

She vowed to work for an inclusive, open Britain, seeking to allay fears that the country will become more insular after it leaves the European Union.

She told EU citizens living in Britain "we want you to stay," and said that after Brexit, the country would not be one retreating behind borders, but "a global Britain that stands tall in the world."

May said the government wants divorce talks with the bloc to end in a good deal, but is "prepared in the event that they do not."

May's speech was also overshadowed by furor over Johnson's comment during a meeting at the conference that the Libyan city of Sirte could become a tourism hub once they "clear the dead bodies away."

Conservative lawmakers condemned the remarks as crass and tasteless, and several called for Johnson to be fired.