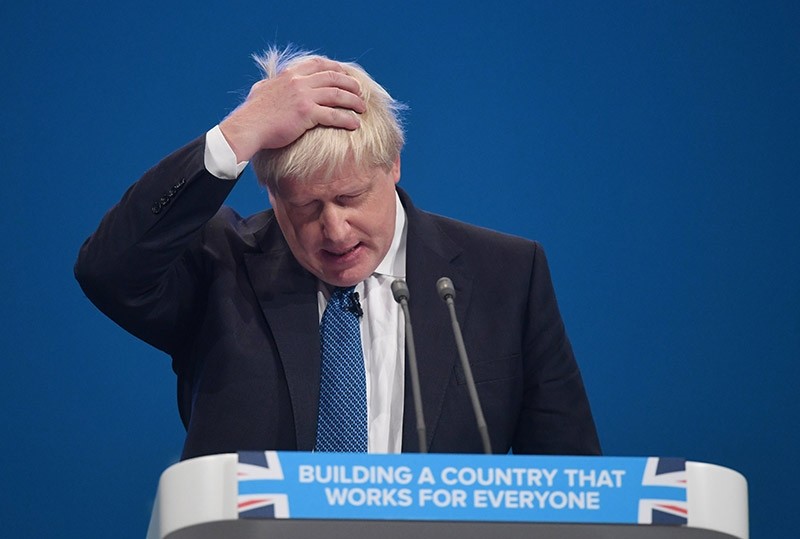 British foreign minister Boris Johnson came under fire Tuesday for saying Libya could become a magnet for tourists and investors -- if it can "clear the dead bodies away" first.

Reflecting on his August visit to Libya, strife-torn since the toppling of longtime dictator Moamer Kadhafi in 2011, Johnson said British businesses wanted to invest in the city of Sirte.

"They have got a brilliant vision to turn Sirte into the next Dubai," he told Conservatives attending the party's annual conference in Manchester, talking up its "bone-white sands, beautiful sea" and "brilliant young people".

"The only thing they have got to do is clear the dead bodies away," he added, before laughing.

Johnson's political career has been characterized by outspoken comments and personal controversy, which have won voters over but also led to despair among both detractors and colleagues.

His comments on Sirte, from where Islamic State militants were driven out in December, were slammed by shadow foreign secretary Emily Thornberry.

"For Boris Johnson to treat those deaths as a joke -- a mere inconvenience before UK business people can turn the city into a beach resort -- is unbelievably crass, callous and cruel," said Thornberry, a Labour MP.

"There comes a time when the buffoonery needs to stop, because if Boris Johnson thinks the bodies of those brave government soldiers and innocent civilians killed in Sirte are a suitable subject for throwaway humor, he does not belong in the office of foreign secretary," she added.

Johnson travelled to Tripoli and Benghazi, becoming the first British foreign minister to visit the latter city since 2011, the year Kadhafi was overthrown and killed in a NATO-backed uprising.

MP Jo Swinson, the Liberal Democrats foreign affairs chief, said Johnson lacked the diplomatic skills necessary for his role and called on Prime Minister Theresa May to fire him.

"This latest unbelievably crass and insensitive comment about an issue of such importance is further proof Boris is not up to the job. May needs to get her house in order and sack him," Swinson said.

Johnson later turned to Twitter to defend his comments, accusing people "with no knowledge or understanding of Libya" of wanting to "play politics with the appallingly dangerous reality in Sirte".

"The reality there is that the clearing of corpses of Daesh fighters has been made much more difficult by IEDs and booby traps.

"That's why Britain is playing a key role in reconstruction and why I have visited Libya twice this year in support," he said in a series of tweets.

"Boris and every politician should at all times be sensitive in their use of language," he told BBC Radio 4's Today program.

Johnson's appointment last year as Britain's top diplomat has added a global dimension to his gaffes, at a sensitive time as the country negotiates its exit from the European Union.

The foreign minister's Brexit diplomacy has seen him tell a Czech newspaper it was "bollocks" to claim that freedom of movement of people was an EU founding principle.

He also told Italy's economic development minister the country should support Britain's access to the single market if it wants to keep selling Prosecco to the UK.

But Johnson's unorthodox approach has proven a success among Conservatives, with frequent debate about whether he will be the next party leader.