7 killed in Germany as hurricane-force winds cause chaos 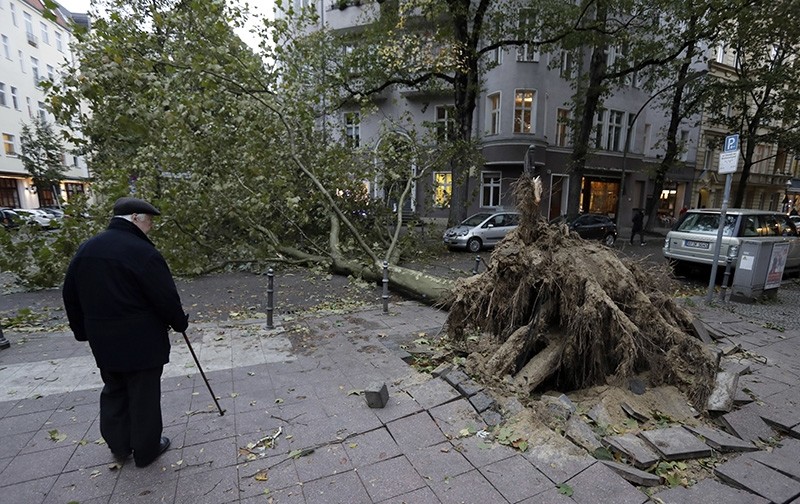 Authorities in Hamburg warned residents to stay inside after a tree fell on a car and killed a woman. A truck driver was also killed near Rostock when a tree hit his vehicle.

In Berlin, where winds reached up to 120 kph (75 mph), flights were temporarily grounded at the city's two airports and much of the public transportation system was shut down.

One woman died in the capital after a tree fell on her car. Four other people were killed in the surrounding region of Brandenburg.

The storm ripped trees from the ground in Berlin, which have fallen across streets, paths and train tracks, blocking local transportation and injuring several people.

The S-Bahn rapid transit system in the German capital, which largely operates above ground, was brought to a halt.

In the North Sea coastal town of Wilhelmshaven, a crane weighing 1,000 tons was swept off its hinges and destroyed, a spokesman for the port authority said, adding that no one had been injured in the incident.

In Hamburg, about 250 kilometers north-west of Berlin, the fire brigade warned residents not to leave their houses. It had received 700 emergency calls within two hours. In Berlin, the number was 705 between 4 pm and 7 pm (1400 GMT to 1700 GMT).

A spokesman for the Berlin fire brigade said that threats to human life were being prioritized over damage to property.

Hundreds of people were left stranded at train stations after German rail operator Deutsche Bahn cancelled its services in the northern states of Lower Saxony, Schleswig-Holstein and Bremen, as well as commuter trains in Hamburg.

Long-distance trains to and from the capital Berlin were also cancelled due to safety concerns. A high-speed train from Amsterdam to Berlin came to stop just across the German border, leaving its 400 passengers in a lurch until fire crews and Red Cross volunteers transported them to a local sports hall for warmth and shelter.

Several international flights from the airports in Bremen and Hanover were cancelled.

Berlin's two zoos shut their doors, saying in a statement that "elephants, zebras and giraffes ... are retreating to the safety of their enclosures."